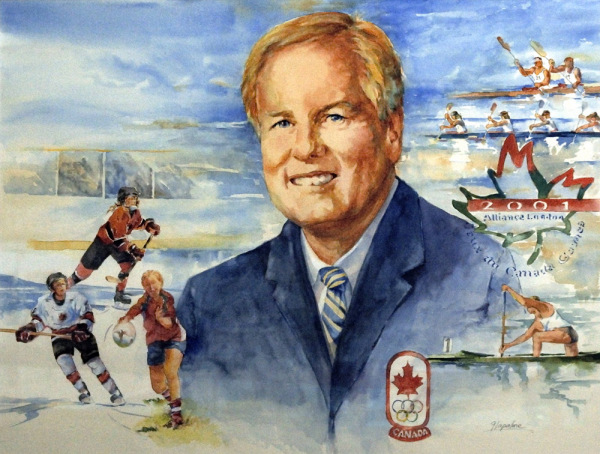 Tim Sample was born in Barrie and has resided in this City since 1989. He attended Barrie North Collegiate, where he was Student Council Vice-President, as well as President of the Boys’ Athletic Association. He played on three GBSSA Championship football teams, was intermediate track champion. Outside of school, he won several speed skating competitions at the Barrie Winter Carni¬val, and was a member of the Barrie Co-op Midget and Barrie Plumbers Junior hockey teams.

His career has taken him to Toronto, Montreal, Kingston and Ottawa, and back to Barrie. In each of his adop¬ted communities, he has been an enthusiastic hockey and fastball player, and has coached hockey and baseball. During his time in Montreal, he was a member of several Business Men’s hockey and fastball titles, and he coached hockey teams to Montreal South Shore titles at the Mosquito and Bantam levels. He was a founder and Director of the St. Lambert Hockey School.

Sample has had an outstanding career in the field of volunteer sports administration and event management. He was a volunteer with the National Canoe Team 1977-1989. He served as Olympic Team Manager in 1980 and 1984. He managed the Canoe Team at five World Championships, three Continental Cups, two Canada/America Cups, and at numerous other international regattas.

He is a former Chairman of the Canadian Paddling Committee, and a former Vice Commodore of Ottawa’s Rideau Canoe Club (R.C.C). He served on the R.C.C. Building Committee, and chaired the 1981 National Championships for Canoeing hosted by the R.C.C. He is a founder of the Canada Day International Regatta in Ottawa. Canada’s largest competition outside the Nationals. He organized and chaired both the canoeing bid portion of Ottawa’s bid for the 1994 Commonwealth Games. He received the R.C.C. Executive of the Year Award in 1982.

Sample volunteered at the June 1992 International Association of Athletics Federations (IAAF) council meetings in Tor¬onto He then was appointed Chairman of Volunteer Services for the fourth IAAF World Indoor Track and Field Championships held at the Skydome March 12-14, 1993. This was the largest event ever held in Canada outside the Olympics or commonwealth Games.

Sample co-chaired the Fencing Competition at the 1991 Ontario Winter Games hosted by Collingwood and Barrie. He was the Chief Operating Officer for the 2001 Canada Summer Games in London. He worked with the Nike Athletic Support Program at the 2002 Salt Lake City Olympics and provided operations consulting to the 2003 World Cycling Championships. He has been a Board Member of the Canadian Olympic Association. He was the General Manager of the Ontario Senior Games Winterfest 2005 which was held in Barrie. In addition, he has designed and managed the marketing programs for the Central Ontario Section of the Canadian Figure Skating Association, the Ontario Deaf Sports Association and the New Barrie Sports Complex fundraising program.

Sample has been a long time coach of baseball, hockey and soccer at various competitive levels, from house league to rep and is an NCCP Intermediate Level Coach. Tim Sample was inducted into the Barrie Sports Hall of Fame in 2006 and served as the Hall’s Chair from 2007 to 2010. He currently resides in Barrie, and is married with three children.