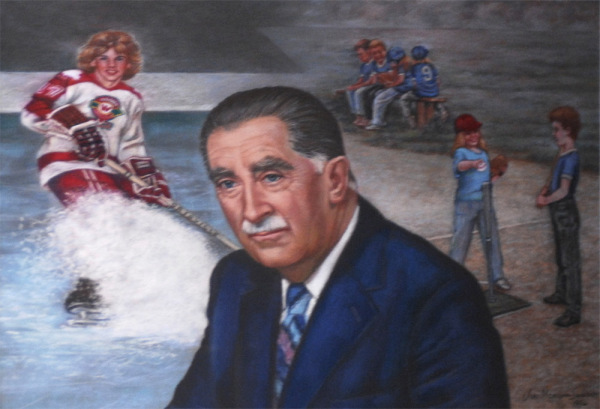 Bill Garner had a passion for Barrie, and participated in its development by involving himself in its business, service clubs, political and sporting communities.
Garner was a member – and for several years, Chairman – of a very proactive Barrie Parks Board. This was a volunteer organization which coordinated, during the postwar years, the development of Barrie’s parks and recreation facilities prior to the establishment of a Recreation Committee under the city’s auspices. The Board under his chairmanship developed Barrie’s first public tennis courts, established a growing network of ball diamonds to meet post-war demand, and expanded the parks system to include many of the parks that Barrie citizens enjoy today.

Widely identified with the local softball scene, Bill Garner was involved with the sport in Barrie from the 1930’s through the 1970’s. He managed the Roxy Aces for many years, including to an O.A.S.A. Championship in the mid 1930’s. He was an Executive member of the Ontario Amateur Softball Association for a number of years in the 1930’s and 1940’s, and sponsored many Garner’s Sports Teams in the Barrie Softball League. He was a long-time President of the Barrie Softball League, and was made Honourary President of the Barrie Major Fastball League, which position he held until his passing in 1978.

Garner was also deeply involved in the sport of hockey. He served on the Executive of the Barrie Colts Junior Hockey Club in various capacities during the 1930’s and 1940’s, including Manager, Secretary-Treasurer, and Treasurer, which latter position he held when the club won the 1934-35 O.H.A. Junior “B” title. He also held various executive positions with the Ontario Hockey Association during the same period. Along with Bill Bell, also a devoted member of the Barrie Lions, Garner got that service club involved with the sponsorship of the Juvenile hockey team, which won the O.M.H.A. Championship in 1946. His commitment to minor hockey in Barrie also included his work with the Barrie Church Hockey League through the 1940’s and 1950’s, prior to its merger with Legion Minor Hockey. In addition to serving as the League’s President, Garner coached, managed, trained, carried sticks, cleaned the ice, and generally pitched in with whatever tasks were necessary to sustain the league.

Garner was a founding member of the Barrie & District Conservation Club in 1954. An avid fisherman, he was keenly interested in conservation.

Bill Garner opened Garner’s Sports in 1931. It was operated as a family business for over 70 years.