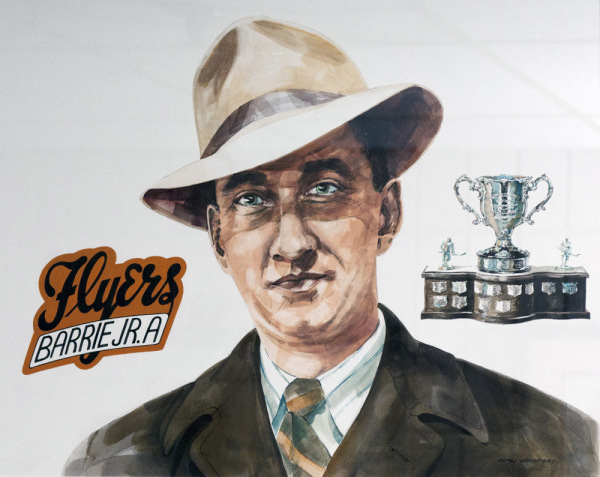 Charlie Christie was born in Craighurst in 1910, the youngest of five children, and the only son of the C.P.R. Station Master. He attended public school in Craighurst, and later, High School in Alliston. As a youth, he was an enthusiastic supporter of hockey and baseball in particular, and of sports in general.

By 1930, Christie had become a permanent resident of Barrie, where he would remain for the rest of his life. His unflagging devotion to Barrie’s baseball and hockey teams, along with his genial nature and organizational abilities, soon saw him elected to a number of management positions with local sporting clubs. He was elected President of the Barrie Senior Baseball Club in 1940, but resigned this position in 1942 to devote himself more fully to hockey.

In 1942 Charlie Christie was elected President of the Barrie Colts Junior ” B” Hockey Club. He became, at the same time, the Ward 3 Alderman on Barrie City Council. Sporting interests in the community never had a better or more supportive friend in city politics. Along with his friends Archie Marshall and Howard Norris, also members of the Colts Executive, Christie worked tirelessly to promote and improve the club. The three combined in 1943 to bid for a Junior “A” franchise for Barrie. Christie would be President, Norris the General Manager, and Marshall the Secretary-Treasurer. They were able to secure the services of famous native son “Hap” Emms as coach, in the event that the bid was successful. Barrie’s acceptance, however, was contingent upon obtaining an artificial ice surface, and here his political position proved invaluable. He not only persuaded City Council to install the artificial ice plant, but also to obtain the outstanding shares in the then privately-owned arena.

Under Christie’s leadership, the group’s diligence and fund-raising efforts paid off with the award of a franchise, and the Junior “A” Barrie Flyers were born in 1945. The team of Christie, Norris, Marshall and Emms ran a franchise which became the toast of the country, winning four O.H.A. titles, three Eastern Canada Championships, and Memorial Cups in 1951 and 1953.

Charlie Christie gave a lifetime of service and support to athletics in his community. With a friendly disposition. his skill at teamwork, and in dealing with authority and bureaucracy, he was a man who got things done. His behind the scenes efforts are in no small measure responsible for Barrie becoming part of Canadian junior hockey legend.

For many years he managed the Arcade Store in downtown Barrie, then became sales manager for Emms Electric, and finally went into business for himself with Christie Appliances.