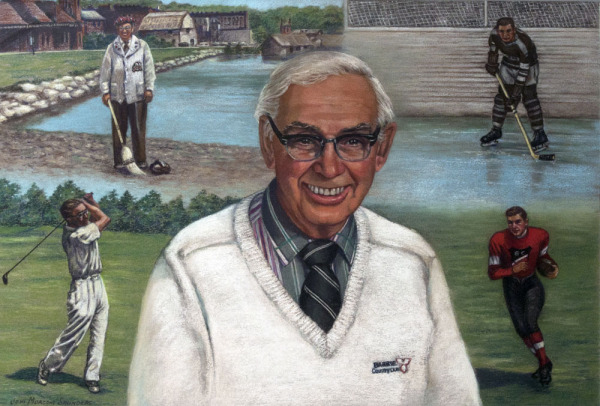 Bill Dyment is still remembered as one of the finest golfers ever produced in Simcoe County. An outstanding amateur well into his 70’s, Dyment was a consistent winner at major amateur events throughout Ontario. Born in Barrie in 1911, he took up golfing at the age of 12. He won his first Simcoe County championship in 1930 at the age of 19 years and repeated three times between 1930 and 1949. He won the first of a number of Barrie Country Club championships in 1931, and through the years staged many great duels for this title with Emerson Creed. On July 31, 1948, Dyment blazed around the Barrie Country Club course in 69, tying Creed’s course record.

Dyment held several other course records including Aurora Highlands and Walkerton Golf & Country. He won important amateur events all over southern Ontario, from Peterborough to Toronto. In 1934 Dyment went to Kirkland Lake to work in the Wright-Hargreaves Mines and play hockey for the mine-sponsored NOHA Senior team. He joined the Kirkland Lake Golf & Country Club and won the club championship three times from 1935 -1937. He won the Northern Ontario Long-Driving event, with a 333-foot shot off the tee. He was Barrie Country Club President in 1949, won the 1972 Simcoe County Seniors event, and shot his age on his 76th birthday.

Dyment was an excellent hockey player, starring in the Junior Church League and for the Barrie Colts before playing in the U.S., first with Chicago, then two seasons with the Hershey Bears of the American Hockey League. Upon removing to Kirkland Lake for more secure work, Dyment led his team to three consecutive Mines League titles. The intervention of the Second World War did not dampen the enthusiasm of Canadian servicemen for the game of hockey. Dyment joined the Armoured Corps and played with Camp Borden A9 Rams. While serving in Europe, he played with the Canadian Armoured Corps while attaining the service rank of Lieutenant.

Bill Dyment enjoyed a number of other sports. He was an excellent club-level curler, winning several bonspiels from Alliston to Bracebridge, and including his own Barrie club championship. He played a little baseball and lacrosse, but his best school sport was football. One of the finest Simcoe County high school players of his age group, Dyment captained the Barrie Collegiate Seniors, played in the backfield, and handled the kicking chores He was a standout runner, and regularly punted over 50 yards.