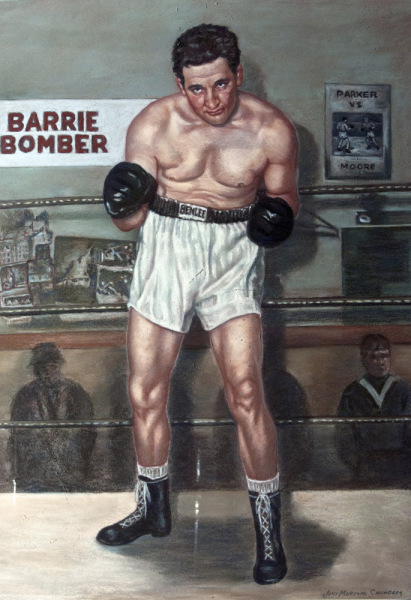 Born in Saskatchewan, James Parker moved with his family in the early 1930’s to Barrie, where his father had a Massey-Harris dealership. He began boxing in 1947 while working as a farm labourer in Alberta, and won the Alberta Novice Heavyweight Championship in only his 4th fight; in his 5th, he knocked out Open Heavyweight Champion Johnny Pehara, whereupon provincial boxing officials replaced Pehara with Parker on the 1948 Olympic trials team. Parker lost there to eventual Olympian Adam Faul.

After a few more impressive KO’s in 1948, Parker was recruited by well- known Toronto fight promoters Joe and Vic Bagnato, who changed his name to “James J. Parker,” and dubbed him the “Barrie Bomber.” He embarked on one of the most successful amateur heavyweight careers in Canadian boxing history; during 1949 Parker’s KO streak reached 17 before he lost a controversial decision to Winnipeg’s Jim Saunders at the Empire Games trials. He stopped his last three amateur opponents, thereby totaling 20 KO’s in his last 21 amateur fights.

Parker turned pro in 1950 and promptly KO’d his first five opponents, becoming a fan favourite in eastern Canada and the United States. He won 18 of his next 20 bouts – 15 by KO – and quickly became a main event fighter. He closed out 1951 with three victories over ranked fighters, including the Greek Heavyweight Champion George Tsakaris. Although in 1952 he lost a decision to top-ranked contender Nino Valdes, in 1953 he KO’d the previously undefeated Oscar Pharo, and his decision over Edgardo Romero stopped that fighter’s 25-bout winning streak.

Parker soon became discouraged over the difficulty in getting fights against ranked contenders, who were reluctant to face a slugger who could derail a promising career with one punch. In 1955 he defeated Earl Walls, by a decision, for the Canadian Heavyweight title. The decision was later changed to a draw due to an alleged scoring mistake. He beat South African Johnny Arthurs for the Canadian version of the British Empire title (there was some dispute over the title’s vacant status, and that of the idle reigning champion) in 1956, and then KO’d former German and European Champion Heinz Neuhaus for only the second time in a 50-fight career.

In the largest Canadian fight promotion to that date, Parker fought the great Archie Moore at Maple Leaf Stadium in an elimination bout for the World Championship Belt vacated when Rocky Marciano retired undefeated. He suffered a vicious cut, resulting in a ninth-round TKO, and then retired for almost two years before attempting a comeback that included a first-round KO loss at the hands of a young George Chuvalo.

James Parker was elected to the Canadian Boxing Hall of Fame in 1998.