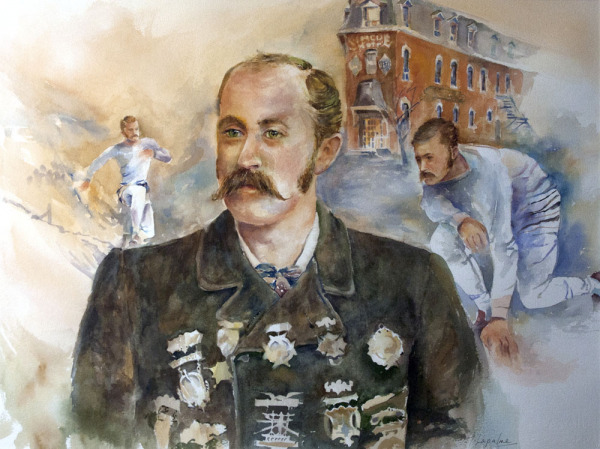 E. W. Johnston was born in Glenville, Ontario in 1855. He grew up in the village of Bell Ewart, in Innisfill Township. He became a full-time resident of Barrie when he married the daughter of Ervin W. Hamner, the well-known hotelier and proprietor of the Simcoe Hotel, residing on John Street (later Maple Avenue).

Johnston was one of the world’s most famous “all-around professional athletes” in the rowdy 19th century world of professional “athletics,” as track and field and related events were then known. Professional athletics in the period during which Johnston excelled, about 1875 to 1890, often included hippodroming (arranging results for the purpose of influencing odds and making successful wagers), gambling, and prize money events.

Barely 20 years old, Johnston began competing for $5 and $10 prizes at the Caledonia Games of Toronto in 1875, as well as other, similar events. By 1876, he was already recognized as one of the great all-rounders in North America. At the Centennial Sports Meet held in Philadelphia that year, he won a stunning 17 of 21 events on the program, competing against the best professional athletes from around the world. Seven of those victories reportedly established unofficial world records.

1878 was another banner year for Johnston. At the July 1st Dominion Day meet at Belleville, he leaped 451″ to eclipse the American record in the hop-step-and-jump (known later as the triple jump). At the Baltimore Caledonia Games, he established a new world standard of 5’3″ in the standing high jump. He won four events, and added two second-place finishes, at a Saratoga, New York meet. His year concluded with a brilliant performance on September 5 th at the New York Caledonia Games, where he won the standing broad jump (10’1″), the standing high jump (4’4″), the hop-step-and-jump (41’6″), and finished second in the half-mile, the caber toss (39’3 1/2″), and the hurdles race.

Athletics, especially track and field, only became “amateurized” late in the 1890’s and after 1900, chiefly as a means of excluding the working classes from competition. This initiative was driven through the leadership of the French aristocrat, Baron Pierre de Coubertin, the founder of the modern Olympic Games, who helped to expunge the records of the then professionals.

E. W. Johnston, however, was one of the world’s greatest athletes in an era of unfettered professionalism that preceded the golden age of sports in North America.