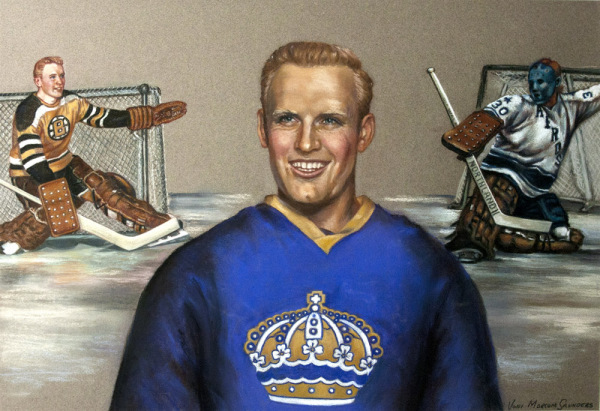 Barrie native Wayne Rutledge first came to prominence in the fall of 1959, when “Hap” Emms took a chance by making this unproven goaltender, to whom he had purchased the rights the previous season, the starter for the Junior “A” Barrie Flyers. The Flyers had stumbled badly from their halcyon days of OHA dominance, but Rutledge was a brilliant star in an otherwise dark period for the Flyers organization. The rangy net minder was among the league’s finest, and was chosen ahead of such luminaries as Gerry Cheevers to start the 1960 OHA Junior “A” All-Star Game, in which the league selects defeated the defending champion Toronto Marlboros 9-4. When Emms moved the club to Niagara Falls in 1961 due to, among other factors, declining attendance, Rutledge moved with the club, and closed out his junior career there.

Rutledge split nine professional games between Clinton and Kingston in 1962, before moving to the Senior “A” Windsor Bulldogs, and backstopping them to the 1962-63 Allan Cup title. He played another season with Windsor in the IHL, and then had a three-year stint in the Central Pro League with the St. Paul / Minnesota Rangers and the Omaha Knights. During his second season in Minnesota, 1965-66, Rutledge played the team’s full 70-game schedule, led the league with seven shutouts, was named to the First All-Star Team, and was chosen the league’s outstanding goaltender. He joined Omaha in the New York Ranger chain for the 1966-67 campaign, played another full 70-game slate, and repeated as the CPHL’s First All-Star and most valuable goaltender.

With two outstanding seasons behind him, Rutledge’s opportunity came with the National Hockey League’s first expansion in decades. The Los Angeles Kings made him their second choice (after the great Terry Sawchuk) in the Expansion Equalization Draft. Originally penciled in as the backup, Rutledge was thrust into the starter’s role when Sawchuk was injured early in that first post-expansion season. He played three seasons with the Kings through 1969-¬70, spending brief periods with their AHL affiliate in Springfield as Los Angeles experimented with Gerry Desjardins and Billy Smith. But they invariably recalled Rutledge, who had become a reliable and consistent goalkeeper.

He spent the next two seasons entirely in the minors with the Denver Spurs and Salt Lake Golden Eagles of the Western League. When ex-teammate Bill Dineen, now coaching in the newly-formed World Hockey Association, offered a new opportunity and a chance to play regularly, Rutledge wasted little joining the 1972-73 Houston Aeros. In six WHA seasons through 1976-77, he backstopped the Aeros to a pair of Western Division titles and the 1974 Avco Cup (WHA Championship). In 176 regular season WHA games he compiled a lifetime 3.23 goals-against average, to go with his career 3.35 NHL standard.

After retiring from hockey Rutledge moved to Huntsville, Ontario, where he raised horses on his farm and also worked for the Dawson and Mirror Glass Company. Rutledge passed away on October 5, 2004, at the age of 62, following a battle with stomach cancer.