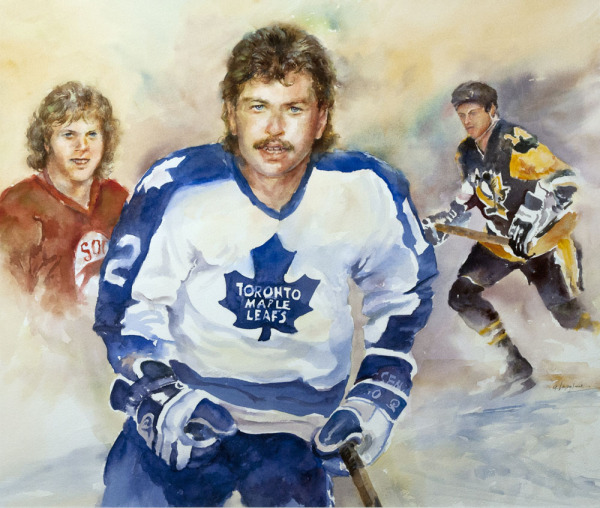 Doug Shedden was born in Wallaceburg, Ontario, but moved to Barrie at a very young age. He played 10 years in the Barrie Minor Hockey Association, including with the 1976-77 York-Simcoe League Champions, the Co-op Midgets. He was drafted by the Hamilton Fincups in the 1977 Ontario Hockey League draft, and played 32 games before being dealt to the Kitchener Rangers in early 1978. He was part of another mid-season trade to Sault Ste. Marie in 1979-80 for Paul Coffey. In his final junior season (1980-81) he had a breakout campaign with 51 goals and 72 assists for 123 points.

Selected by Pittsburgh in the 5th round (93rd overall) of the 1980 NHL Entry Draft, Shedden split his first pro season between the Penguins and their American Hockey League affiliate, the Erie Blades. He was-Pittsburgh’s MVP and its leading scorer in 1982-83, and scored 81 goals over his next three seasons with the Penguins (1982-1985), until, having already scored 32 in the 1985-86 season, he was traded to the Detroit Red Wings for Ron Duguay. 1986-87 was a tumultuous year for Shedden. The Red Wings sent him to their AHL affiliate in Adirondack after 33 games, and then traded him to the Quebec Nordiques (along with John O’Grodnick and Basil McRae) for Brent Ashton, Mark Kumpel and Gilbert Delorme. When the Nordiques sent him to the AHL Fredericton Express to finish the year, Shedden opted to spend 1987- 88 with the independent Baltimore Skipjacks of the AHL.

He signed a free-agent contract with the Toronto Maple Leafs in 1988, and played through the 1990-91 season with both the Leafs and their AHL affiliate, the Newmarket Saints. In 416 regular season NHL games, Shedden had 139 goals and 186 assists for 325 points.

Doug Shedden embarked on a new and successful career in hockey when the Colonial League’s Muskegon Fury hired him as a player-coach for the 1992-93 season, his last as an active player. He became the Coach of the Central Hockey League’s Wichita Thunder in 1993, and won a pair of CHL Championships during his three seasons there. He then spent four seasons as Coach of the Louisiana Ice Gators of the East Coast Hockey League, and one season with the Flint Generals of the United Hockey League, where he won the Colonial Cup. Shedden was hired in June, 2000 as the Head Coach and Director of Hockey Operations of the Memphis River Kings of the CHL leading them to two CHL championships in three years. At the end of the 2002-2003 season, he was hired as the head coach of the St. John’s Maple Leafs, the AHL farm team of Toronto. In 10 previous full seasons of professional coaching, Shedden had never missed the playoffs and won five league titles, including four in the Central Hockey League and one with the United Hockey League. His overall coaching record was a staggering 452-203-61. Even with those credentials and after guiding St. John’s to their best record for wins in franchise history, Shedden was let go by the Leafs when the team was eliminated in the first round of the play offs. In 2005 he moved to Finland and coached for three years before moving to Sweden on 2007. Shedden was, however, still contracted to the Finish National team and under his coaching the team won the bronze medal at the 2008 World Championships held in Halifax and Quebec City.

In 416 NHL games Shedden compiled 139 goals and 186 assists. In the summers, he would often return home to Barrie and help with summer hockey schools in the area, and was always willing to lend his name to worthwhile community activities.

Shedden was inducted into to the Barrie Sports Hall of Fame in 2001.