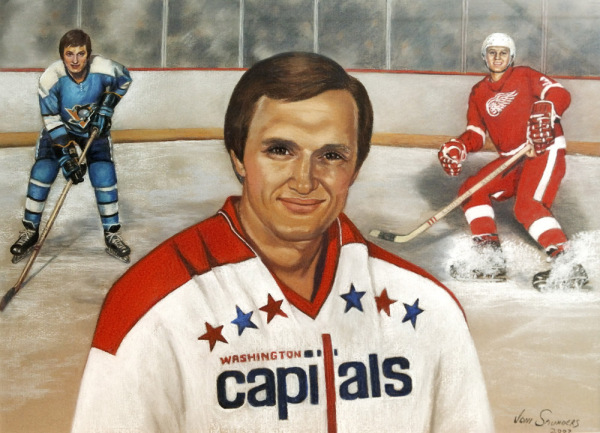 Jack Lynch moved to Barrie at the age of six, and throughout the 1960s, was considered to be one of the outstanding prospects of the Barrie Minor Hockey Association. He was a part of several excellent local teams, and finished off his minor hockey career in Barrie by scoring 13 goals for the 1968-69 Co-op Midgets.

A highly-regarded defenseman, Lynch played Junior B hockey with the Owen Sound Greys in 1968-70, and was the first draft choice of the OHA Junior A Oshawa Generals in 1970. After two full seasons in Canada’s motor city, he was then chosen 24th overall in the 1972 NHL Entry Draft by the Pittsburgh Penguins.

In 1972-73 Lynch played 47 games with Pittsburg and 26 games with the Hershey Bears. The next year he played 20 regular-season games for Hershey and 17 for Pittsburg before being traded to Detroit with Jim Rutherford for Ron Stackhouse on January 17, 1974. His stay with Detroit was short as he was traded a year later to the Washington Capitals. In his Second game with Washington Lynch suffered a broken jaw and missed most of February. He played with the Capitals for the next five years, but a knee injury in 1977 reduced his ability to play. After a brief stint with Hershey in 1979 he decided to retire. He stayed on with the Washington team as an analyst on Washington Capitals’ television broadcasts.

During his seven-year NHL career, Lynch played in 382 games, and at one time, held the Capitals’ single season record for goals by a blue liner.

Currently employed by the provincial Ministry of Culture, Tourism and Recreation, Lynch works as a Travel Promotions Officer (media relations), promoting attractions, special events and skiing. His voice is heard on radio throughout the province, as he tapes regular reports, as well as writing press releases for radio, television and newspapers, which provide accurate information about more than 100 members of the Ontario Ski Resorts Association for southern Ontario’s three million skiers. He is also responsible for promoting major local sporting events with which his Ministry has involvement.

Lynch stayed involved in hockey as a colour commentator for the OHL Game of the Week on Global TV and CFMT.

Lynch has also been heavily involved in the community. He served on the Barrie Hot Air Balloon Festival committee, as well as on the Public Relations Committee for the 1992 Ontario Winter Games, hosted jointly by Barrie and Collingwood. He is active in the Games for the Physically Disabled, and serves as a member of the board of directors of the Ontario Ski Resorts Association. In addition to being both a member and past chairman of the Georgian College Advisory Committee for the School of Tourism and Hospitality, he has, for several years, coached a girls’ softball team in Barrie.