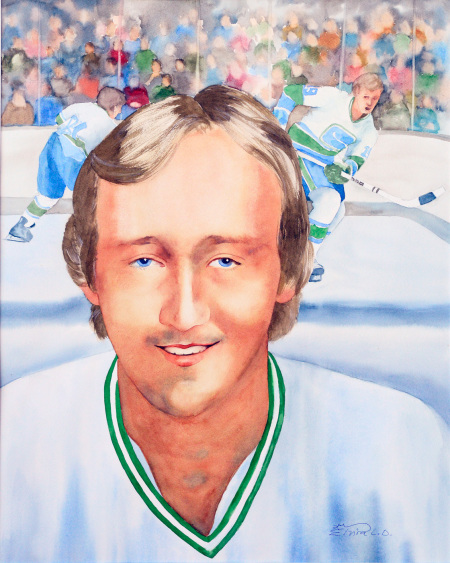 Glen Richardson was born and raised in Barrie, playing hockey from the age of 9-16. During his playing time in Barrie he helped the U.R.W. Bantams and the Barrie Co-op Midgets to OMHA Ontario Championships. The U.R.W. Bantams were also the first Barrie team to win the prestigious Silver Stick Tournament in Port Huron, Michigan. Richardson’s Midget team won the International Richmond Hill Tournament and the Brandon Manitoba Invitational, both tournaments attended by top teams from around North America.

Richardson was drafted by the Kitchener Rangers in 1972. After playing a year and half in Kitchener, he was traded to Hamilton. Playing for Bert Templeton the team made it to the OHA final, losing in the seventh game to the Toronto Marlies. Richardson was drafted by the Vancouver Canucks in the 4th round 64th overall in the 1975 NHL Amateur Draft. He was also drafted by the Winnipeg Jets in the 3rd round 38th overall in the 1975 WHA Amateur Draft. In 1975 Richardson chose to go to Vancouver where he played 24 games for the NHL team and 45 games with the Tulsa Oilers of the CHL. He played two more years in Tulsa amassing 45 goals and 72 assists in 186 games. He also competed in 25 playoff games.

He was part of the 1975-76 Tulsa Oilers CHL Adams Cup Championship team. He finished his playing career with the Barrie Flyers of the Senior A hockey league. Upon completion of his hockey career, Richardson attended Laurentian University where he obtained a BA degree in Economics. Richardson became manager and Head instructor of hockey programs at the National Training Rinks (NTR) in Barrie when it opened. He spent 14 years at NTR helping many teens achieve scholarships as well as achieve their goal of playing hockey at a higher level: NCAA, AHL, European Professional Hockey and the NHL. Richardson also gave back to the community by coaching for 9 years in the Barrie Women’s Hockey Association (BWHA) including coaching his daughter for 5 of those years. He was instrumental in helping many girls earn scholarships in the USA.

Richardson was also an evaluator for the Ontario Women’s Hockey Association for the U18 program for 3 years.