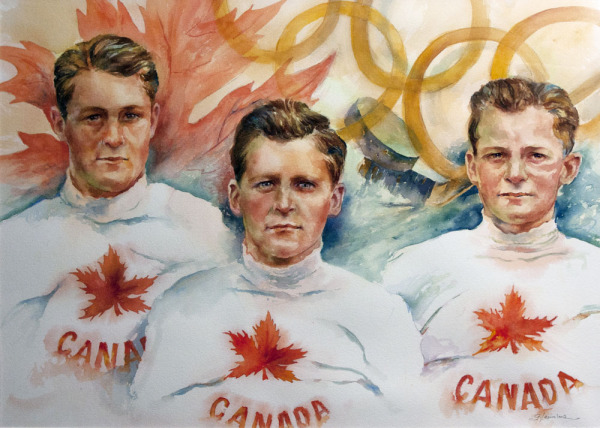 Two Barrie brothers Hugh and Herbert (“Bert”) Plaxton, with their cousin Rogers (“Rod”), brought honour to the local sports community through their exploits with the Toronto Varsity Graduates in the 1928 Winter Olympic Games.

In the 1927-28 season, Hugh was a member of the Grads ice hockey team, coached by Conn Smythe. The team won the OHA Senior A title, then defeated Fort William to take the Allen cup earning the right to represent Canada in the 1928 Olympics in St. Moritz, Switzerland. Bert was brought up as a substitute player for the Fort William series. Hugh successfully lobbied to have Bert and Rod join the team, for the Olympics, against Smythe’s wishes. Smythe refused to go the Olympic’s when the Plaxtons were allowed to join the team. Hugh Plaxton scored 12 goals in the three games the team played. Bert chipped in with a pair in two games, while Rod played defense for three games. Canada defeated Sweden 11-0, Great Britain 14-0 and Switzerland 13-0 to earn the Nations third straight Olympic hockey gold medal.

Bert went on to practice law and served briefly in the Ministry of Defence under W.L. Mackenzie King . Roqers later became a mortgage manager for Life Assurance of Canada in Toronto. Huqh moved on to study and practice law in Toronto after the Olympics. He returned to hockey in 1932-33 when he scored one goal and three assists and earned four penalty minutes in 15 games with the Montreal Maroons of the NHL. He finished off the season with a stint in the international American League with the Windsor Bulldogs and the Vancouver Maroons of the West Coast Hockey league. Hugh again retired from hockey and returned to his law practice. He successfully ran and served as a liberal MP from 1935 to 1940. He then went on to served in the Canadian Navy during World War II as Lieutenant Commander of the HMCS York.