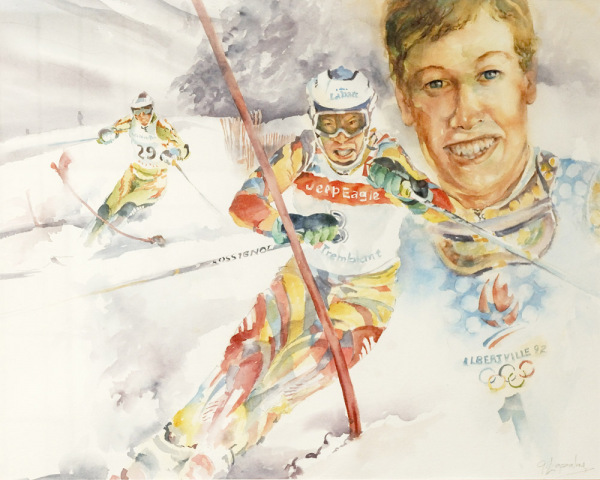 Barrie native Rob Crossan seems destined to have been a member of Canada’s National Ski Team. His parents were both members of the ski patrol at Collingwood’s Blue Mountain. They had him skiing by age three, and racing by the time he was ten. At the age of thirteen, he finished fourth in the Canadian Juvenile Championships, earning an invitation to a camp of national coaches, and placing him on the road to the National Team.

In 1986 he skied with both the Ontario Alpine Ski Team and the Canadian National Development Group, won three of five races, and finished 2n1 in another, and was the Sealtest Cup Ontario Alpine Overall Champion. He placed second overall in the Canadian Alpine Ski Series. He won both the Junior and Senior Combined at the Canadian Alpine Ski Championships. He followed up with outstanding results in the American Junior Invitational National Championships, the North American spring Series, FIS races in Quebec, and Eastern and Western Nor-Am races. For this breakthrough year, he received an Achievement Award from the Ontario Government Sports Award Program, and was named Barrie’s 1986 Amateur Athlete-of-the-Year. More importantly, he was named in 1987 to the National Team.

Although his first international success as an 18 year-old member of the National Team was a 24th place finish in his first World Cup downhill in Japan, Crossan was a slalom specialist. He competed internationally in slalom, giant slalom, and super giant slalom, as well as in the combined event (downhill one day, slalom the next). His twelfth place finish in the combined at the 1992 Albertville Olympics is the best ever finish for a Canadian male in that event. He also finished 20th in the slalom and 35th in the “Super-g” at Albertville.

Crossan also competed at the 1994 Olympic Games in Lillehammer, where he finished 20th in the giant slalom. His (10th) place in the 1991 World Championships at Saalbach, and 8th place in the slalom at a 1993 World Cup event in Park City, Utah, remain the best-ever finishes by a Canadian male in those events. He was the North American Slalom Champion in 1993 and 1994, and won 11 different Canadian Championships between 1983-1993 encompassing all the alpine disciplines.

Now retired, and a resident of Collingwood, Rob Crossan is both a Level Ill Coach and Level Ill Examiner with the Canadian Ski Coaches Federation. He served several years as the Head Coach for 26 coaches and 150 athletes with the Toronto Ski Club. He currently is the Manager of Race and Competitions at Blue Mountain in Collingwood.