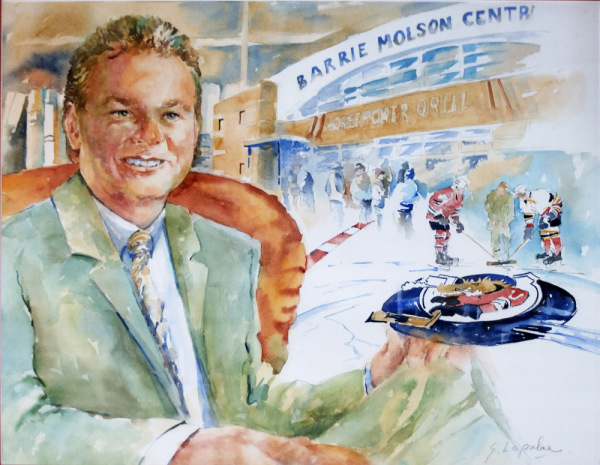 Like many Canadian boys, Jamie Massie began his love affair with hockey early – at the age of five while living in Toronto. He played organized hockey in the Toronto Marlboros system from atom to bantam, until he transferred to the St. Catharines private school, Ridley College. His love of sports continued there, where Massie played on the football and hockey teams, and was also the stroke oar on the heavy fours crew. He went on to captain the hockey team at Northwood University (Midland, Michigan), from which he graduated with a degree in Business Administration.

As an entrepreneur in Barrie, Massie has contributed generously to the sponsorship of minor sports, especially the Barrie Minor Hockey Association. In 1991, he became involved with the OHA Junior B Barrie Colts, a team that was traditionally competitive, but always seemed to struggle financially. Under his leadership, the club achieved both financial health and competitive excellence, becoming a model for other Tier II franchises. The Colts enjoyed four outstanding seasons, including the 1992-93 campaign, which saw the team compile a remarkable 67-2-1 record en route to the Sutherland Cup, emblematic of OHA Junior B supremacy.

The community support generated by the Junior B Colts convinced Massie that Barrie would similarly support an Ontario Hockey League, major junior franchise, if a new arena could be built to make the team financially viable. With a combination of hard work, determination, creativity and business acumen, Massie managed to bring together the necessary business interests, as well as federal, provincial and municipal levels of government, and in only two years the state-of-the-art, 4,200-seat Barrie Molson Centre was constructed. After starting at the old Dunlop Arena, the Colts played their first OHL game at the BMC on New Year’s Eve, 1995, the year major junior hockey returned to Barrie for the first time since the old Barrie Flyers left for Niagara Falls in 1960.

The Colts reached the playoffs in each of the first nine seasons in the OHL, winning the Central Division title in 1998-99 and the entire league in 1999-2000, making it all the way to the final game of the 2000 Memorial Cup in Halifax. Massie continued the philosophy he established when the Colts played in the OHA. His players receive his personal dedication, are treated with respect and dignity, and are encouraged to maximize their community involvement and the full range of opportunities available to them, both on and off the ice. The Colts organization has also graduated over 20 players to the professional hockey ranks while other Colts have represented Canada at the World Junior Hockey Championships.

Massie was named the Businessman of the Year by the City of Barrie in 1993, and in 1995 as the community’s Ambassador of the Year. He received a honourary degree from Georgian College in 1993 and an Outstanding Alunmi Achievement Award from Northwood in 1994. The OPP recognized him in 2002 with a Meritorious Service Award, and the following year, Massie received the Queen’s Jubilee Medal for distinguished service to the community.

On April 7, 2006, the Ontario Hockey League announced the approval of the transfer of ownership of the Colts. James Massie will retain minor ownership, and will remain as the chairman of the board for the club.