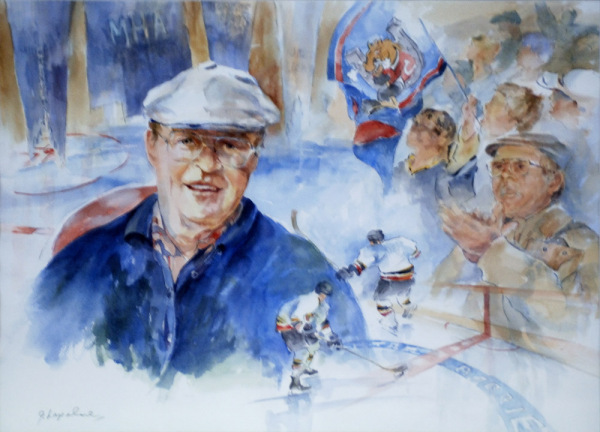 Mike McCann has been a fixture in Barrie hockey circles for more than 30 years. After playing college hockey at Clarkson University in Potsdam New York, for four years on a hockey scholarship, McCann returned to his hometown of Barrie, and began coaching in the Barrie Minor Hockey Association.

From 1970 to 1981, McCann coached ten different teams from Atom to Midget, but was also often invited to help out the coaches from other levels. On four occasions his teams reached the OMHA finals, with the 1978-79 Minor Midget squad earning the OMHA title. In 1977, his Peewee charges won the prestigious Quebec International Peewee Tournament.

In addition to his coaching duties, and his full-time job teaching at Eastview Collegiate, McCann also served on the BMHA executive as the league’s long-time representative to the York-Simcoe League. He was also a strong supporter of OMHA coaching clinics in the Barrie area. For the 1981-82 season, the BMHA took over the operation of the Barrie Junior B Colts, and McCann was the obvious choice to coach the team. In the first year under Mike’s guidance, the team secured a playoff spot after jumping four spots in the standings from the previous year, and took the team to the post-season again in 1982-83, and was named coach of the year in the Central Ontario Junior B League for that season. In 1984-85, the Barrie Colts won the Central Ontario Junior B title, and McCann was again named coach of the year.

While he was working with the Colts, he was still active in the BMHA and would help organize the summer power-skating and hockey development schools that were operated by the league. Mike gave up his coaching in the late 1980s to concentrate on scouting and player development. He was also responsible for encouraging many of his Junior players to pursue college scholarships. When the BMHA handed the Colts over to the group headed up by Jamie Massie in the early 1990s, McCann stayed on as the team’s head scout and continued to provide high-level players for the team.

In 1995, the Colts entered the Ontario Hockey league, and McCann came along as a scout and head of player development. The Colts have never missed the playoffs, and keep producing college and professional players to this day.

In 2000, the year after the team made it all the way to the final game of the Memorial Cup tournament, eventually losing to Rimouski, McCann became the general manager of the Barrie Colts.

McCann has been a key figure in the development of hockey in Barrie, and has been responsible for the development of many fine hockey players, and young citizens.
On May 16, 2006 the Barrie Colts announced the resignation of the team’s general manager, Mike McCann.