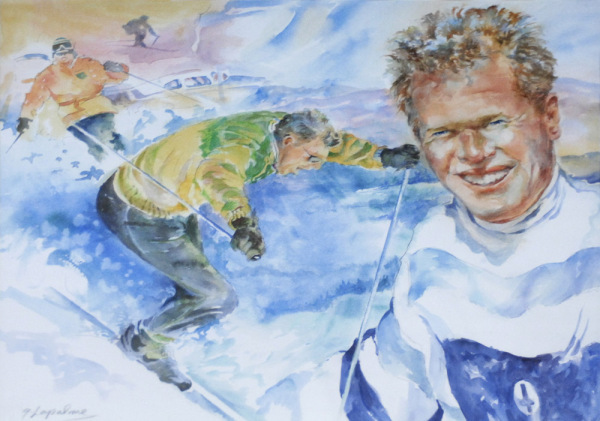 Although not well-known outside of skiing circles, Barrie native Jim McConkey is something of a legend inside them. From the time he started skiing the Barrie Golf Course and through local quarries at the age of seven with his older brothers, McConkey was a ground-breaker and innovator in the sport of skiing.

He helped found the Barrie Ski Club in 1946 at Mount Jimmy (in Allandale west of Essa Road), and in 1947 attended the Canadian Travelling Ski School, and also completed a course as an assistant ski instructor with the Canadian Ski Instructors Association. In 1948, he accepted that skiing was going to be his calling in life, and gave up his job at the bank to accept a position as the Assistant Ski Instructor in Collingwood, while also continuing to teach at Mount Jimmy.

He later taught at the Snow Eagle Ski School, Gray Rocks, in St. Jovite, Quebec, before becoming acquainted with Luiggi Foegger. McConkey joined Foegger as part of a camera crew filming a movie on the Athabasca Glacier in Alberta, which revolved around the story of the 10th Mountaineering Division and a plane crash. Here, McConkey learned to ski in deep powder. He subsequently joined Foegger in 1950 to operate the Yosemite. National Park Ski Area School, and participated in more ski and ski-related filming. He conducted ski parties to powder ski in the Canadian Rockies, and was later certified by the Far West Ski Association.

Between 1950 and 1960, McConkey was recruited to handle the marketing for Mount Norquay at Banff, where he became a manager and later senior instructor at the Gray Rocks, Snow Eagle Ski School, before moving to Salt Lake City to work for Mutual of Omaha and ski at Alta. He taught throughout the American west, becoming recognized as one of North America’s premier powder snow skiers and instructors.

After 1960, McConkey ran ski schools at Sugar Bowl at Donner Summit in California, at Park City, Utah and at both Tod Mountain and Whistler in British Columbia. The McConkey Lift at Park City and the McConkey Bowl at Alta are named in his honour. He was the ski school, helicopter and ski shop operator at Whistler from 1968 until 1985, when he retired from the school and began working for Whistler’s marketing department, helping open the resort up to the Japanese market.
As early as 1969, McConkey had for seen the development of Whistler into a year- round, world-class ski resort. He sold his store operations in Whistler in 1996, and retired to Denman Island, B.C.

The most famous of the so-called ‘powder hounds’, McConkey introduced ski acrobatics that were the precursor to many of today’s freestyle and extreme ski moves. In 2001 he was inducted into the Canadian Ski Museum’s Canadian Ski Hall of Fame (formerly known as the Honour Roll of Canadian Skiing).

In 2009 McConkey’s son Shane, a ski legend in his own right, died while filming an extreme ski-base jumping movie in Italy.