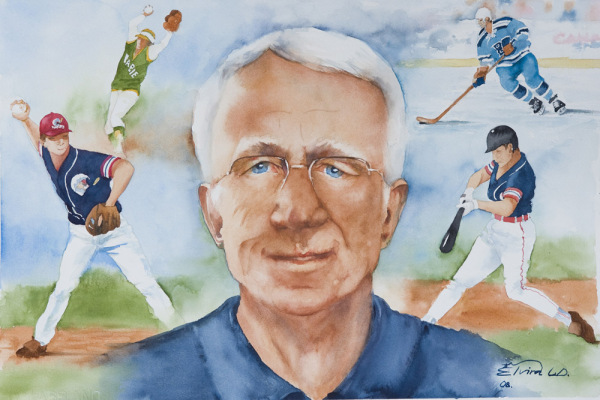 Gary Calvert was born in Barrie and played numerous minor sports throughout the years. From 1968 to 1986 he performed various roles with the Barrie Minor Hockey Association as Director, Manager, Coach and Assistant Coach and was instrumental in co-founding the BMHA Annual Hockey Tournament.

Gary is, however, better known as one of Barrie’s baseball, fastball and softball icons. He has been involved with local ball teams since 1968 coaching and managing some very elite athletes along the way. He coached and managed softball in the Barrie Senior Softball League, helped establish the inter-ward softball league and coached for the Barrie Minor Baseball Association. He was involved with Barrie’s 1975 Lakeview Dairy team that won the Intermediate Ontario Fastball Championship. In 1978 he was the manager of the Barrie Slessor and Periard intermediate AA provincial Champions in Softball. In 1998 Gary coached the Barrie Select Juvenile Baseball Team and brought them to the Provincial Championship.

Gary was the driving force in the acquisition of an Inter-county Baseball League franchise (the Barrie Baycats) in 2000. He became the first President of the club. and later became General Manager of the team. His baseball knowledge and years of established contacts allowed him to obtain some elite player talent for the team. That became evident in 2005 when the Baycats Baseball Club won the Inter-county Baseball League Championship.

Calvert’s achievements have been recognized over the years. He received the Government of Canada Certificate of Merit for ”Contribution to the Community” award in 1988. He was the recipient of the Barrie Sports Hall of Fame’s Unsung Hero Award for “Outstanding Contribution to the Development of Sports in Barrie” and was also the recipient of the “Paul Harris Fellowship” from the Rotary Club of Barrie for “Outstanding Contribution to his Community”. He was also asked to co-chair the 1991 Ontario Winter Games Fundraising Committee.

Gary currently lives in Barrie and has worked in several administrative capacities for the City of Barrie.