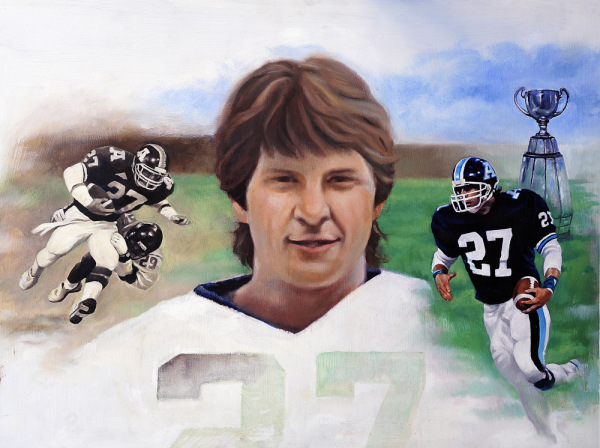 Paul Nastasiuk grew up in Barrie participating in sports including hockey in the winter and baseball in the summer. During his high school years he began to excel in both baseball and football. He was a member of the Barrie Marauders baseball teams that won a number of championships in the early 1980’s. His athletic abilities, at Barrie Innisdale Secondary School, earned him the school’s Athlete of the Year award in 1983.

He played for the Innisdale Invaders football team from 1980 to 1983. Nastasiuk’s main position was as the teams tail back but he was also used in other positions and did some of their punting. He was a star player at Innisdale for three years. After graduating from Innisdale he continued his education at Wilfred Laurier University (WLU). Paul made the WLU Golden Hawks football team in 1983/84. Under the coaching of Canadian Football Hall of Famer “Tuffy” Knight, Nastasiuk made an immediate impression winning the teams Most Valuable Player award. His football talents were also noticed both provincially and nationally. He won the 1983/84 Ontario University Athletics (OUA) Rookie of the Year Award as well as being selected as an OUA second team all star. The Canadian Interuniversity Sport (CIS) also presented him with the Peter Gorman 1983/84 Rookie of the Year. He continued to impress the University Football community and was selected as an OUA first team all star in 1984/85. Nastasiuk was inducted into the WLU Golden Hawk Hall of Fame in 2000.

In 1986 Paul was selected by the BC Lions in the 1st round (9th overall) Canadian Football League (CFL) draft. In the next CFL equalization Draft he was selected by the Ottawa Rough Riders and later sent to the Toronto Argonauts. He played for seven seasons in the CFL and still holds the CFL record for the most special team tackles in a playoff game. In the 1991 division finals romp of Winnipeg (42 to 3) he had 5 special team sacks. Paul and the Argonauts went on to defeat the Calgary Stampeders 36-21 to capture the 1991 Grey Cup.