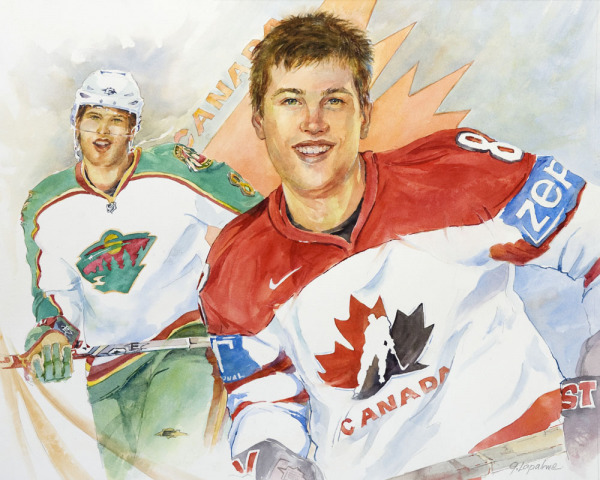 Brent Burns was born March 9, 1985, in Ajax-Pickering, Ontario. The family moved to Lindsay in 1991 and to Barrie in 1996. Burns went to school in Barrie and played his minor bantam year with the Barrie AAA Icemen. Having played in the MTHL before coming to Barrie, he chose to finish his minor hockey with the North York Canadiens bantam team. In 2001, the OHL Brampton Battalion drafted him from the Canadiens in the third round. The 2001-02 season saw him toiling with the Couchiching Terriers junior team in Orillia. Brampton called him up for the 2002-03 season and he didn’t disappoint them. He scored 15 goals and 25 assists for 40 points in the regular season and led the team in playoff scoring with 11 points in 11 games. He apparently impressed some NHL scouts as well because the Minnesota Wild selected Burns in the first round of the 2003 NHL entry draft, 20th overall.

Burns turned it up at the Wild’s training camp earning a roster spot with the NHL team for 2003-04. He had spent most of his junior hockey playing forward but the Minnesota coaching staff had other ideas for the 6’5” tall, 219-pound player. After a brief stint at forward, he was converted to defense and finished his first NHL campaign on the blue line. During the 2004-05 NHL lockout, he played with the Houston Aeros, the Wild’s American Hockey League affiliate. In 73 games, he had 11 goals and 16 assists for 27 points while solidifying his defense position. In five years in the NHL, he has played 326 games, scored 35 goals and 82 assists for 117 points.

Burns’ best year, so far, was probably 2007-08. He signed a four-year contract extension with the Wild in October of 2007. He then went on to record 15 goals and 28 assists for 43 points in 82 season games. Colorado eliminated Minnesota in the first round of the NHL playoffs but Burns was not finished. Team Canada invited him to join them to compete for the 2008 World hockey championship. Canada took the silver in a disappointing overtime loss to Russia but Burns was superb. He led all Canadian defensemen in scoring with three goals and six assists in nine Games and was selected by the directorate as the best defenseman of the tournament.

Burns’ automatic induction into the Barrie Sports Hall of Fame is the result of winning a medal in world competition. The 2008 silver, however, was his second medal win in a World contest. In 2004, the Wild allowed him to play for Team Canada at the World Junior Hockey Championship in Helsinki, Finland. This team also brought home a silver medal and Burns posted six assists in the six-game series.