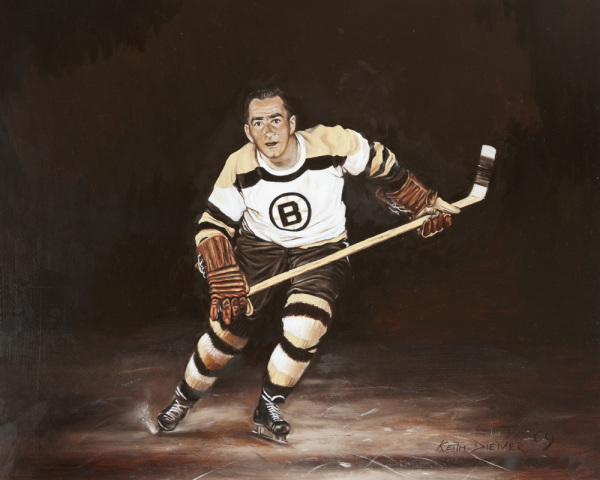 Ray Gariepy was drafted in 1945 by the Barrie Flyers Junior OHA team. He moved to Barrie from Timmins to play for the legendary Hap Emms. While in Barrie, Gariepy gained a reputation as a bone-crunching defenseman. One memorable leveling of future NHL great Bernie Geoffrion is still remember by old time hockey fans. He played for three years with the Flyers and the highlight of his junior career was playing in the Memorial Cup Championship against the Port Arthur Bruins in 1948.

Gariepy played in the AHL with Buffalo Bisons (1948-50) and Hershey Bears (1950-53). Although small in stature at 5’9 and 180 pounds, Gariepy’s diligent work ethic and his continued tough physical play made him a fan favorite. By the time he made it to the Boston Bruins in 1953-54, his reputation as a heavy hitter had preceded him and earned him the nickname “Rockabye” Ray.

He spent 1954-55 with Pittsburgh of the AHL winning the Calder Cup The Bruins traded his NHL playing rights to the Toronto Maple Leafs. He had a one game call up with the Leafs in 1955-56, but finished off the year with Pittsburg.

Gariepy retired from the professional ranks and returned to Barrie in 1956 but didn’t give up the game. He played locally for a number of OHA Senior A teams. They included the Owen Sound Mercurys, the Collingwood Georgians, the Chatham Maroons and the Barrie Flyers. During his final years with the Flyers he also took on some of the coaching duties. Gariepy finally retired from hockey after the 1969-70 season.

Ray Gariepy became a very successful local business man in the construction industry and served as the President of The Barrie Builders Association from 1979 to 1981.