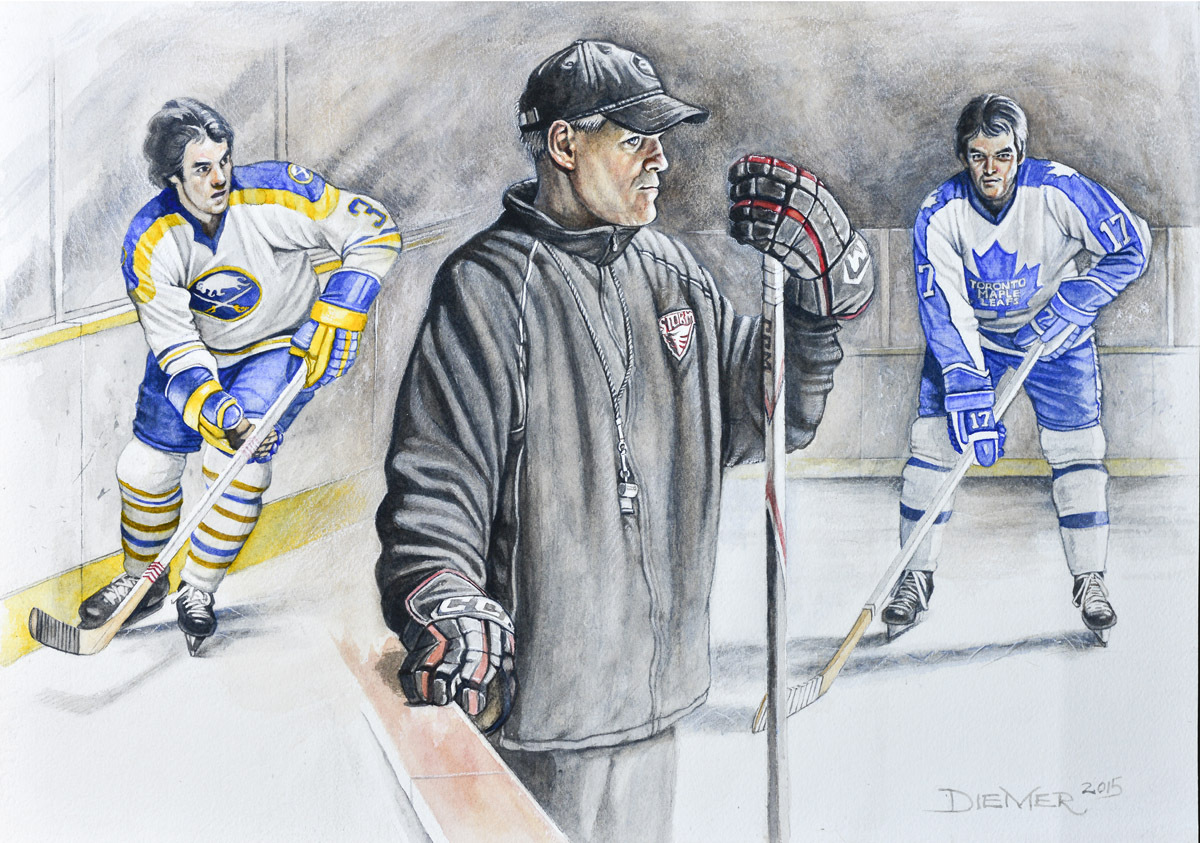 Bill Stewart was a member of two Barrie OMHA championship teams – the 1972 AA Bantams and the 1973 AA Minor Midgets. In 1973-74, he played for the Dixie Beehives OHA Junior B team. In 1974, he joined the Kitchener Rangers of the Ontario Major Junior Hockey League (OMJHL). Stewart played with the St. Catharines OMJHL team in 1975. He finished his OMJHL career with the Niagara Falls Flyers.

Stewart was selected in the 1977 NHL draft by the Buffalo Sabres. He played three years in the Buffalo organization. In 1980 he was traded to the St. Louis Blues. After completing three years in the St. Louis organization, he signed as a free agent with the Toronto Maple Leafs. In 1985, he signed with Minnesota. Stewart played in 273 NHL games accumulating 68 total points and 435 PIM. In 1986, Stewart decided to play in Italy’s Professional Ice Hockey League. He started with the Val Pusteria (Brunico) team in 1986. He continued to play in Italy on five different teams for the next eight years. He was a two time member of Italy’s Olympic team and three time member of their World Cup team.

Stewart began his professional coaching career with the Muskegon Fury of the Colonial Hockey League in 1995. In 1996, as head coach, he coached the OHL Oshawa Generals to the OHL championship. In the Memorial Cup in Hull Quebec, the team lost in the Semi-Final. The following season, 1997-98, Stewart coached the Saint John Flames to the AHL Calder Cup Final, losing in six games. Stewart was named the AHL Coach of the Year. The following year, Stewart was appointed assistant coach of the New York Islanders. On January 21 1999, Stewart was promoted to their head coach. On April 30 1999, the Islanders replaced him with Butch Goring. Stewart returned to the OHL to guide the Barrie Colts to their most successful season, with a 43-18-6-1 record. They won the OHL championship. In the 2000 Memorial Cup in Halifax Nova Scotia, the Barrie Colts lost 6-2 in the Final game.

Stewart returned to Europe in 2000 to continue his coaching career in the German Elite league. For the next 10 years he coached teams in Germany and Austria. During that period his teams won three championships and advanced to the finals four times.

In 2010-11, Stewart got his third chance in the OHL when the Guelph Storm brought him in as a consultant. In 2011-12 he was appointed assistant coach. He served in that position for three years, reaching the Memorial Cup again in 2014. In January 2015, Stewart was appointed Head Coach of the OHL Guelph Storm.