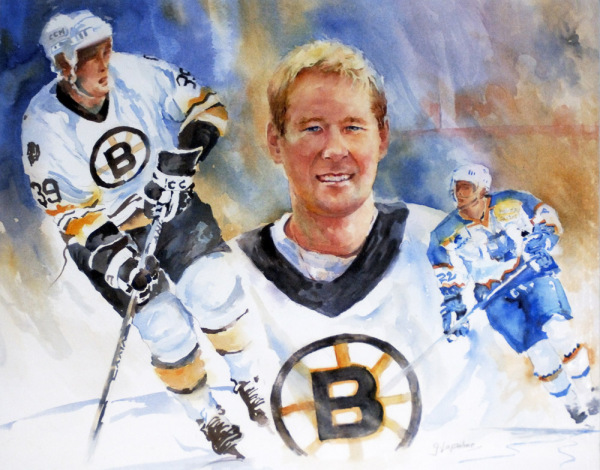 Barrie’s Greg Johnston played his entire minor hockey in Barrie one level above his age group. In 1982, Greg was drafted 10th overall by the Toronto Marlboros. In spite of missing part of the 1982-83 season with a broken ankle, He had a very successful OHL career. Johnston recorded 160 points in three junior seasons and was selected 42nd overall by the Boston Bruins in the 1983 NHL draft. While still with the Marlies in 1983-84 Johnston played 15 games for Boston when the Bruins were plagued with injuries.

In 1985, Johnston played, with Barrie native Shayne Corson, for Canada at the World Junior championships in Helsinki. It was here that Johnston and his team won the Gold Medal qualifying him for automatic induction into the Barrie Sports Hall of Fame. Barrie Sports Hall of Fame’s Shayne Corson/Greg Johnston trophy for the Athlete of the Year was named in honour of their performance in the 1985 World championship.

Over the next 4 years, Greg played for Boston, for the Moncton Golden Flames under Terry Crisp and for Boston’s farm team, the Maine Mariners. He played in the Stanley Cup finals for the Bruins in 1988 and in 1990. Boston traded Johnston to New York Rangers in exchange for Chris Nilan on June 28, 1990. The Rangers immediately traded him to Toronto in exchange for Tie Domi and Mark LaForest. In 1990, he only played one game with the Leafs before being sent to their AHL farm team in Newmarket. In 1991-92 he played most of the year for the St. Johns Maple Leafs. Discourage with only playing four games for Toronto in two years, Johnston decided to try his luck in Europe. He scored 87 goals and 207 points in his first two years for the Sauerland Iserlohn ECD club before moving to the Kassel Huskies. Shifted from his normal right wing position to defence, Johnston played his final eight seasons in Germany, and a short stint in Sweden, as a very successful defenseman while still scoring 117 goals and 172 points.

During his NHL career, he played in 187 games with 26 goals and 55 assists. In 2002 Johnston retired from hockey and moved his family back to Barrie where Greg is now a member of Barrie’s police department.