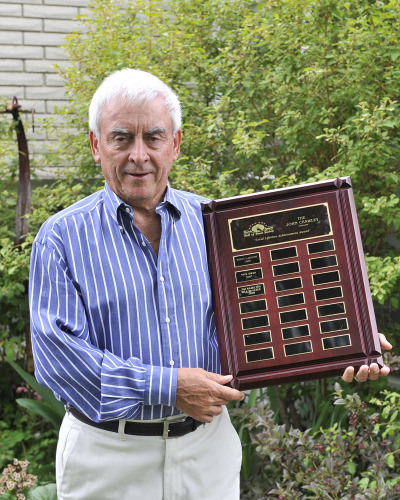 Bill McAleer’s name is synonymous with basketball in Barrie. He has served both the Barrie and Provincial basketball community for over 40 years. He is a co-founder of the Barrie District of Approved Basketball Officials (BDABO), which is the local chapter of the Ontario Association of Basketball Officials (OABO). He Currently serves on the BDABO Executive as Elementary Assigning Officer and rules Interpreter.

At the secondary school level, McAleer has officiated at both the AA and AAA level at a number of Ontario Federation of School Athletic Association (OFSAA) tournaments. He has officiated at the Community College level and the Canadian university level, in both men’s and women’s divisions. He has also worked several national university tournaments. In 1994, he ran the scorer’s table at the World Basketball Championships, which were held in Toronto.

McAleer was honored by the OABO as a recipient of their 40 year Service certificate for his dedication to basketball. The International Association of Approved Basketball Officials has also honored McAleer with a special plaque for his many years of service to basketball.

McAleer’s contribution to basketball alone would certainly qualify him for a local lifetime achievment award but, there’s more to McAleer than basketball. He was also involved in the local slo-pitch scene for more than two decades. He umpired fastball and slo¬pitch games for over 20 years and has served as the Barrie and area representative for the Slo-pitch National organization.