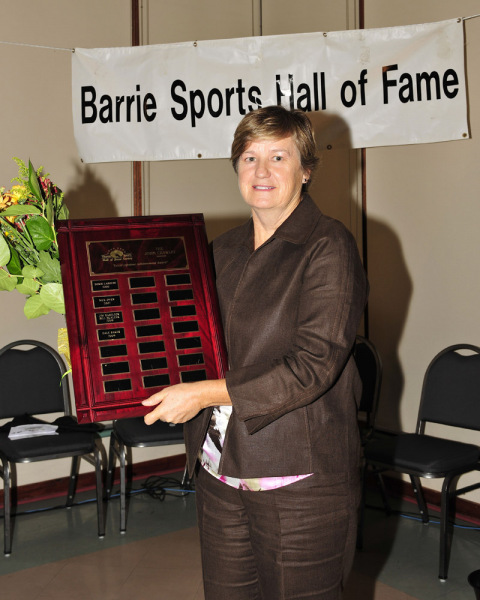 Innisdale Secondary School’s Dale Baker has contributed 33 years of service to athletics and physical education in Simcoe County. Thirty-one of those years have been in Barrie schools. She has been very active in the Ontario Federation of School Athletic Associations (OFSAA) and the Georgian Bay Secondary Schools Association (GBSSA). She has coached numerous high school teams, with many of them capturing GBSSA championships and has helped organize and host five OFSAA provincial Championships. In addition, she has served as an OFSAA convener for four other provincial volleyball championships.

In 2008 Baker held off retiring from her teaching position to help organize the 2008 boys volleyball championships. Three Barrie high schools, including Innisdale, hosted this very successful provincial tournament. In the same year she also acted as OFSAA convener to the (GBSSA) boys volleyball league. She coached the Innisdale Boys AAAA Volleyball team to a GBSSA championship, giving them the right to represent this area in the OFSAA tournament that she helped organizes. In the tournament, her team reached the quarterfinals before falling to the silver medalist Mississauga team.
In 2009, Baker once again put off retirement to coach the Innisdale Boys AAAA volleyball team. Many of the players had been on her team for 4 or 5 years. They rewarded her retirement decision by winning the Georgian Bay championships sending her and the team to the OFSAA championships one more time.

Bakers work ethics have not gone unnoticed. In June 2008, the OFSAA presented Dale Baker with it’s prestigious Pete Beach Award. The award, presented annually is given to the person that exemplifies the former OFSAA executives’ dedication to sport and helping others. She has received OFSAA’s Leadership in Sport award for girls volleyball. She was the 2002 recipient of the Barrie Sports Hall of Fame Jean McCann Unsung Hero award. She was also nominated for the prestigious Ontario Volunteer Service Award..

Bakers coaching talents have also extended beyond school teams. She coached the Georgian Cubs Volleyball club for four years and was a Barrie Minor Soccer coach a number of years ago.