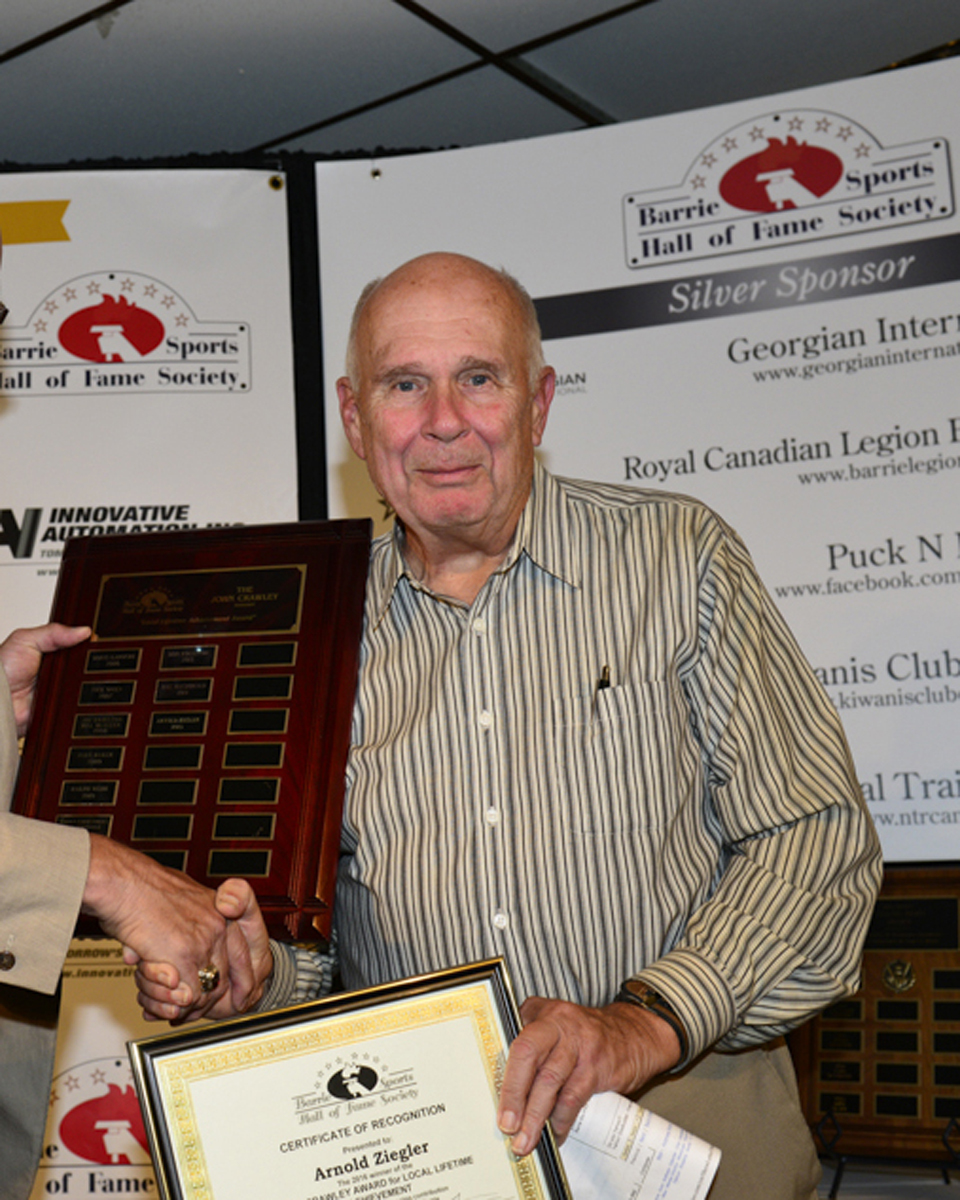 Arnold Ziegler has been umpiring local ball games for over 56 years. He participated in over 160 games last year alone. In 1959, at the age of 20, he started umpiring. Ziegler quickly developed into a respected no-nonsense official. Numerous local players, team management and coaches will, sometimes proudly, admit to being on the receiving end of Ziggy’s animated ejections. He is a carded umpire both provincially and nationally. Over the years Ziegler has umpired baseball, fastball, softball and slo-pitch throughout Ontario. He has twice had the honour of umpiring in the Rogers Centre.

One the most rewarding job has been his long relationship with the Barrie Integrated Baseball Association. BIBA is a baseball league for adults with special needs. He is amazed how special it is for these players to experience playing the game. For them it is like the World Series once a week.

Ziegler’s son Mark is also a carded umpire. The father was extremely proud to have the opportunity to umpire with his son at a recent Wasaga Beach tournament. Ziegler was ready to retire this year but may stick around for the Wasaga Beach’s 30th Anniversary tournament.

Ziegler’s 56 years as an umpire, locally, would in itself qualify him for a local lifetime achievement award. However, he is equally well known for his long term commitment to coaching the game. He was coaching Barrie’s 1962 Junior baseball team when he recruited a young talented player named Nick Owen. A few years later both Ziegler and Owen became synonymous with successful baseball teams in Barrie. They teamed up with Owen as manager and Ziegler as Coach. Some of their notable Barrie teams went on to become Ontario and Canadian Baseball Champions. Their midget, juvenile and senior teams won numerous league titles, and were Ontario Baseball Association (OBA) finalists on five occasions, OBA champions three times and competed in the Canadian championships twice. Their 1985 Marauders juvenile team won the Canada Games gold medal.

When the Barrie Baycats, began play in the Intercounty Baseball League (IBL), in 2001, Ziegler stepped in to be their 3rd base coach. He spent the first three years helping the team get established.

Ziegler’s expertise was not limited to just baseball. He was also a valued executive member of the Barrie Flyers Senior Hockey teams. He was on board in 1974 when the Flyers team captured the Allan Cup symbolic of the national senior amateur men’s champions of Canada.