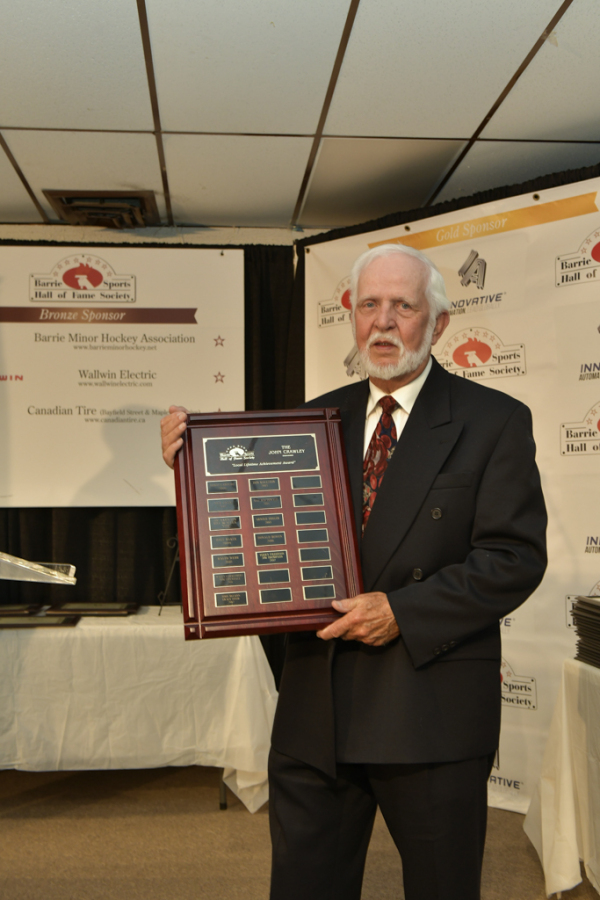 Terry Paddison was born in Guelph and has served sports and the community in Barrie for the past 50 years. In a span covering 30 years, Terry coached volleyball, basketball, and track and field at various levels.

He has been President, Barrie Y Neptunes swim club; Chairperson, Huronia Region of the Canadian Amateur Swimming Association; on the board of directors for the Canadian Amateur Swimming Association (Ontario); and a founding member of the Barrie Trojan Swim Club. As well, he has Chaired Players Services, Golf, Canadian Tour championships (2007 and 2008) at National Pines; and was scorer for the Canadian PGA Championship at National Pines in 2017.

As a Community Leader, Terry was a founding member of Recreation 82, a group of citizens who initiated the building of the Allandale Recreation Centre) and was acting treasurer of that group when it turned over a cheque in the amount of $800,000.00 to the City of Barrie towards construction of the centre. As well, Mr. Paddison was a founding member of the Barrie Sports Hall of Fame Society and chaired an ad hoc committee that created the original constitution of the BSHoF. He was on the executive of the BSHoF for 20 years, 6 years as Chairperson. Terry was also a member and the Chairperson of the City of Barrie Recreation Advisory Committee; chairperson of the group responsible in obtaining approval from the City of Barrie to create a bike and walking path around the Bay; a member of the organizing committee for the Ontario Senior Winter Games when held in Barrie; was a member of the City of Barrie Sesquicentennial Committee, planning the celebration of the Barrie’s 150th birthday; served on the Community Editorial Board of the Barrie Examiner; and is an ongoing contributor of blogs for the Barrie Historical Archive. Further to this, Terry has been on the executive (including 6 years as treasurer) of the Georgian Bay Secondary School Association.

Mr. Paddison is also involved in charitable activities. For 9 years as a volunteer, he has taught physically challenged children how to ski (Track 3 Program) at Pine Ridge Ski Club; is a member of the Allocation Committee, South Simcoe United Way; has trained as a volunteer for home visitations through Hospice Simcoe; created and initiated the first Hike for Hospice Barrie; was co-chair of the Capital Campaign to build Hospice Simcoe House; and has been a volunteer on the Salvation Army Christmas Campaign for 20 years.

Terry has shown leadership and inspiration to youth, the aged, the disadvantaged, and all others, and has managed this at the highest standard. His selfless efforts always fly below the radar as is not one to make himself obvious as he takes on all tasks at the highest level of competence.