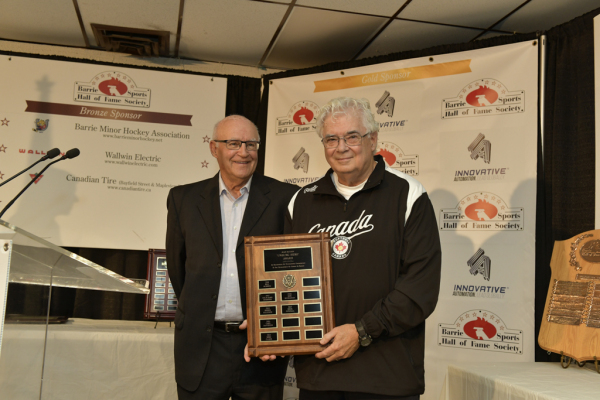 Doug Cundall is a highly regarded official provincially, nationally and internationally. He began umpiring in 1966 working games 4 or 5 nights a week and most weekends. He acquired Level 4 Umpire certification in both Fast Pitch and Slo-Pitch but his hours of experience on the diamond were probably his greatest teacher. He has spent over 50 years as an umpire in Barrie, Simcoe County, and in communities throughout Southern Ontario.

In 1985 Softball Ontario made him Umpire in Chief (UIC) of Ontario’s Zone 6, an area covering Simcoe, Grey, Bruce and Dufferin Counties. Two years later he became a member of Softball Ontario’s Umpire Committee. Cundall carried on in this position for several years while maintaining his normal umpiring duties. He became a Development Clinician, developing and presenting clinics all across Ontario.

In 1995, Cundall became Chair of the Softball Ontario Umpire Committee and was responsible for the umpire program in the province. In 2000, Cundall was appointed Provincial UIC for Slo-Pitch. In this position, Cundall was responsible for staffing, supervising and officiating at numerous high profile provincial Tournaments. He was also in charge of the provincial eliminations and championships for various levels of competition.

In 2002, Cundall became the first Level 4 umpire to become a member of Softball Canada’s Officials Development Committee and, as such, is a Deputy Umpire in Chief of Canada. His responsibilities on this committee were numerous. He was UIC of 9 Canadian Championships for both slo-pitch and fast pitch and personally officiated in five Canadian Championships. He took on the role of updating and developing Softball Canada’s many instruction and training manuals, including power point and overhead materials. He was also in charge of Softball Canada’s Slo-Pitch national exam for four years and was co-presenter of Softball Canada’s first Level 4 on-line clinic in 2011. He has instructed Instructor/Evaluator, Level 4 and Mechanics Clinics and at 5 Blue Conventions across Canada. He was UIC for numerous provincial championships and at the 2010 Ontario Summer Games. Internationally he officiated at the first ever International Softball Congress II championships and worked the plate in the championship game.

Cundall and his wife Gail reside in Barrie. He is also proud that he could give back to the local officials, as Co-UIC (2011) of the Barrie and District Girls Minor Softball Association and as past UIC for the local Slo-Pitch Association. Cundall was presented an Award of Merit by the federal government for his volunteer work in 1988. In 2003, the Softball Ontario Umpire Committee awarded Cundall its Jim Bradford Memorial Award given for instruction and evaluation excellence.