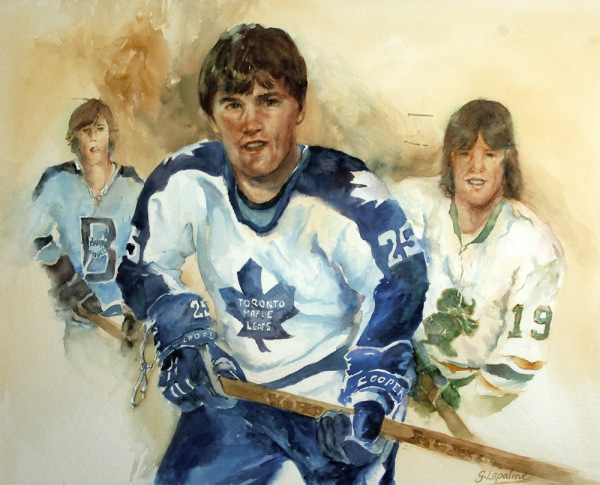 Although Barrie native Terry Martin lived most of his youth in Minesing, he is a prized product of the Barrie Minor Hockey Association, where he played Novice through Midget between 1964 and 1972. He was drafted from the Barrie Midgets in the 3rd round of the 1972 OHA Junior “A” draft, by London, where he played three seasons through 1974-75. He scored 93 goals and 196 points, including a big final season with 43-57-100 point totals.

Selected by Buffalo in the 3rd round (44th overall) of the 1975 NHL Entry Draft, Martin played only one game with the Sabres in 1975-76, splitting the season between the Sabres’ affiliates in Charlotte and Hershey. Martin played with Buffalo through the 1978-79 season, including stints in Hershey with the Bears totaling 16 games. He was selected in the 1979 Expansion Draft by the Quebec Nordiques, but played only 26 games for the organization, split among Quebec, Syracuse and New Brunswick, before being dealt to the Toronto Maple Leafs in December, 1979.

Martin’s most productive NHL years were spent with the Maple Leafs, where he established himself as a solid two-way player – a capable checker with excellent speed and good offensive ability. He put together back-to-back 20+ goal seasons for the Leafs in 1980-81 and 1981-82. The Edmonton Oilers claimed him in the waiver draft at the beginning of the 1984-85 season as compensation for the Leafs’ claiming Jeff Brubaker, but he spent most of the year in the minors with Nova Scotia before being traded again, this time to the Minnesota North Stars in January 1985. A shoulder injury prevented him from finishing the season with the Stars, and he spent 1985-86 in Springfield with the Indians, Minnesota’s AHL farm club. The Leafs re-acquired Martin prior to the 1986-87 season, and assigned him to their own AHL affiliate, the Newmarket Saints, where he finished his career as a playing assistant coach.

Martin has since stayed in the game in various capacities, beginning with a two-year head coaching stint with the OHL Toronto Marlboros (1987-89). He spent six seasons as an assistant coach with the Rochester Americans (1989-90 through 1994-95), one as an assistant with the Buffalo Sabres (1995-96). Martin was named Buffalo pro scout prior to 1996-97 season and remained in that position through 1997-98 season when he was appointed Buffalo’s Director of Pro Scouting. He remained in that position until July 12, 2006 when he accepted a position as Colorado’s pro scout.

Terry Martin scored 108 goals and 211 points during his NHL career.