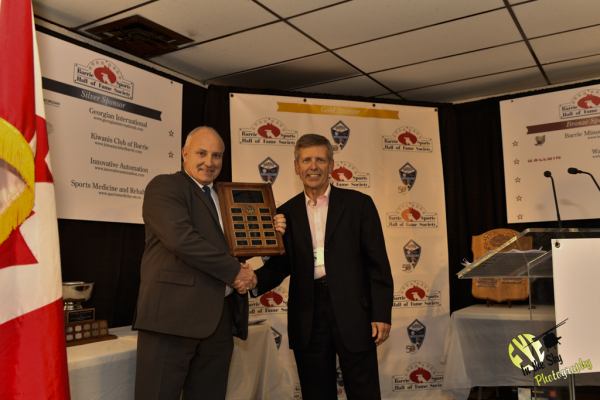 Len has been President of the Barrie Rugby Club for 25 years! During that time Len has volunteered his time organizing, planning and developing the Barrie Rugby Club into what it is today. We are the 2nd largest club in Ontario and 5th largest in Canada with just over 500 active playing members. This does not include the coaches, executive members, and other volunteers that Len has been instrumental in providing a structure and culture designed to encourage growth of the sport as well as growth of character and community.  We currently run programs consisting of  U7 all the way through to Men’s and Women’s Programs. To accommodate such a large playing community Len has also taken on the role of fixtures manager. Meaning that he organizes with Rugby Ontario, Rugby Canada as well as other clubs to set matches, tournaments, and referees. Speaking to the growth of the club. The club is now entering it’s 52nd year. Prior to Len’s involvement the game of rugby was very much a fringe sport, to the point where junior programs did not exist and the game in the sport in the area was falling off. Len has been instrumental in developing a structure in which the growth of the game in Barrie has flourished. Securing land with the city of Barrie and leading a team that was able to secure the Jim Hamilton Rugby Field for the club is one of his many contributions to the growth of the game. Prior to this new space being acquired, Len spent every weekend cutting and lining fields to prepare for upcoming matches. Under Len’s leadership there has been a distinct rise in the amount of girls and women playing the game. Not only does Barrie Rugby offer the opportunity for females to play at every age level, Len has also provided a culture structure that has led to a great deal of success for girls and women on the pitch. Most of our girls and boy’s teams are annually competing for provincial championships and our Women’s and Men’s teams compete in the highest divisions available in Ontario. This would not be possible without Len’s commitment to growth and positive culture within the sport.

Len manages to find time to still actively play, coach and lead within club despite his outside volunteer commitments as well. Len has been the chief organizer behind the development of Blood Drives run by local athletes. Len is also a long standing and high ranking member of the Lions Club. He also gives up his time to coach at a local high school and organizes food and toy drives actively involving youth in the process as a means to grow positive character traits and a sense of community. Len truly believes that Rugby is not just sport, but it is a lifestyle and believes that the game itself is an excellent tool for building community, positive work ethic, inclusiveness and positive contributors to Barrie and the surrounding area.

While all the tangibles are clear and Len’s volunteer hours are unprecedented it is the intangibles that make Len so worth of this award. Len’s compassion for those that are without is something that stands out. Len has given away countless pairs of rugby cleats, balls, jerseys, shorts, and equipment to youth that otherwise would have not been able to participate. Len has organized fundraisers to assist struggling families within the rugby community here in Barrie. Len has opened his home to those that have lost theirs due to fire or flood. Len’s immediate family follows his lead and are active members of the rugby community and approach it the same way with an open heart and passion for development. Len has given so much to the game of rugby and the community here in Barrie, but you would never know this because of how humble Len is and his belief in community over self. Len has selflessly dedicated his life to the development of the Barrie Rugby Club and the larger community. Len does much of this behind the scenes because again he is focused on the development of others not of himself, a sign of true leadership.