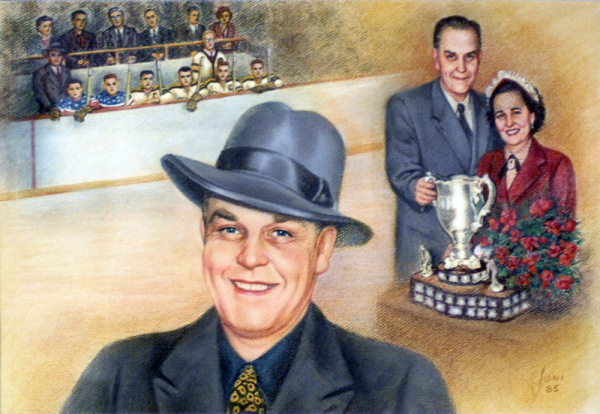 Hap Ems was born and attended school in Barrie, and wasted no time in attracting notice as one of Barrie’ s premier young ath¬letes. He was one of the finest baseball pitchers in the area. He pitched the Baracas team to the 1922 Barrie Church League title, and the Barrie town team to the 1923 South Simcoe League Champion¬ship. Ems’ greatest athletic successes, however, were achieved as a hockey player. He stood out locally at an early age, and went on to play for the CNR team that won the Ontario Apprentice League Championship. As his talents outgrew local competition, Hap left to play for such teams as Brantford and Stratford, the latter team winning the Canpro League title. Hap Emms joined the National Hockey League’s Montreal Maroons for the 1926-27 season, and his 10-year NHL career lasted until 1938. During that time he played 331 games for Montreal, the New York Americans and the Detroit Red Wings, scoring 36 goals and 54 assists as a rugged defenseman/for¬ward. In 1933-34 Hap played on the Prince of Wales Trophy-winning Red Wings, champions of the American Division, and at one time he held the NHL record for most goals scored via penalty shots.

When Ems’ playing career ended, he turned to coaching, and it was here that he made his greatest impact on the game. In 1945 he left his coaching job with the St. Louis Flyers to return to Barrie, and founded the Barrie Flyers dynasty. He and Howard Norris set the club up financially, and Ems coached, recruited and managed, displaying the hockey business sense that made the Flyers a success. The team affiliated with the Boston Bruins and Emms wasted no time making the club a power. The team missed the playoffs its first year, lost in the semi-finals to Terry Sawchuk and the Galt Red Wings its second, and made it to the Memorial Cup in only its third season. They beat the Windsor Spitfires for the OHA title, Montreal Nationals for the Eastern Canada crown, and lost to Port Arthur West End Bruins in the Dominion final. Emms settled for the OHA title the following year, but in 1949-50 the Flyers swept by the Toronto Marlboros and met Jean Beliveau and the Quebec Citadels in the Eastern Canada showdown, one of junior hockey’s most legendary series. They beat Quebec in 7 games, playing the last game of the brutal series on neutral Maple Leaf Gardens ice. They went on to beat the Winnipeg Monarchs for the Memorial Cup. In 1952-53, Emms’ Flyers won the Cup again, this time without pro sponsorship. Alto¬gether his Barrie Flyers won 4 OHA titles, 3 Eastern Canada crowns, & 2 Memorial Cups, and he tutored such luminaries as Orv Tessier, Leo Labine, Don Cherry, Doug Mohns, Don McKenny and Real Chevrefils. His organization also won provincial titles at the Bantam, Midget and Junior B levels. Declining attendance forced Emms to move the team to Niagra Falls in 1961, but the indelible impact he made on hockey in his home town, and the legacy of excellence he left behind, remain.

Today, the Enms Division of the Ontario Major Junior Hockey League is named in his honour, a tribute to the contributions he made to junior hockey in this province.