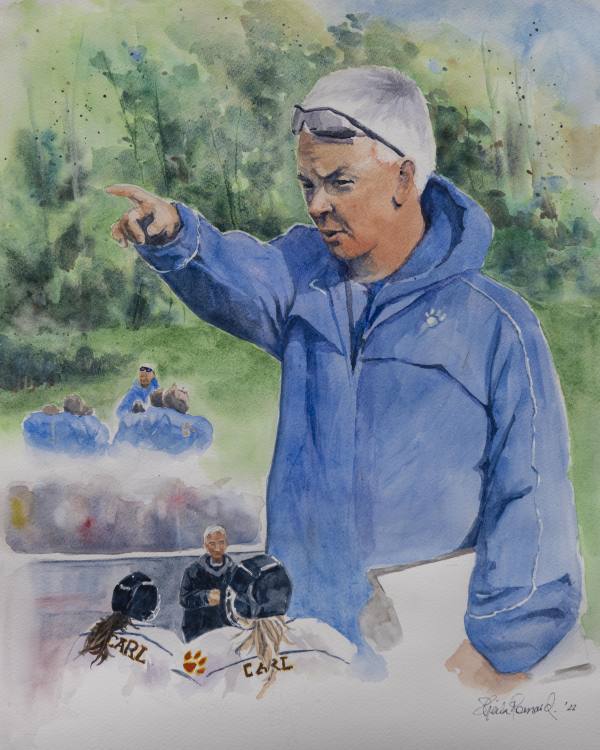 Martin Carl was born in 1959. He relocated to the Barrie area in 1984 after receiving his Bachelor of Education degree from Lakehead University. Between 1984 and 1989, Carl taught at various local elementary and secondary schools. In 1990, he began teaching at Eastview Secondary School. He started his coaching career with the boys football team. During this tenure, Carl took several teams to the Ontario Federation of School Athletic Associations (OFSAA) championships. In 2005, his Eastview team was victorious in winning the provincial championship. In 2002, Carl started the girls hockey program at Eastview after he was approached by some female students who wanted to play hockey. He was the head coach of this program until his death in 2020. He took several girls’ hockey teams to OFSAA over the years, most recently in 2018 and 2019. Carl also coached the girl’s slo pitch team for 15 years starting in 2005. He led the team to the GBSSA championship, the highest level available at that time.

While at Eastview, Carl was the driving force behind establishing Thursday Night Lights. Lights, bleachers, security, and fencing were all brought into the schools to allow for a “professional” night of football. Many players often cited this night as their favourite memory in their high school careers. Carl was also the founder of the Kempenfelt Cup. Every year at Christmas time, teams from 5 local high schools would get together, at the Molson Centre, for a day of playing hockey. Students from the schools would fill the arena to cheer on their teams while wearing specialized Kempenfelt Cup T-Shirts. He organized all the logistics for this event and money for the Christmas Cheer Charity was raised through sponsorships that Carl had arranged with local businesses.

He also established and ran the annual Blue/Pink Puck Cups hockey tournament. Teams from the Simcoe Muskoka Catholic School Board and the Simcoe County District School Board played in a fun fill hockey setting. Proceeds from these tournaments went to the Canadian Cancer Society. He also established the annual Blue/Pink Ball Cups slo-pitch tournament. It operated under the same structure as the hockey program with the proceeds going to Cancer Research.

Upon Carl’s death, this annual event was renamed the “Martin Carl Memorial Tournament”. A number of Carl’s’ athletes went on to be drafted and play in the CFL or with the Women’s Canadian National Hockey program. Carl served as the Chair of the Sports Advisory Committee for Football at OFSAA. He was awarded the KBE Award for “outstanding” contributions to school sport, and the Marr Ross Award for “dedicated coach” from GBSSA. Carl had an outstanding career in education in Barrie. He dedicated his life to providing athletes with the opportunities to play sports. He brought communities of people together, providing memories for athletes and their families to treasure. He was a mentor and role model and the epitome of the word “builder”.