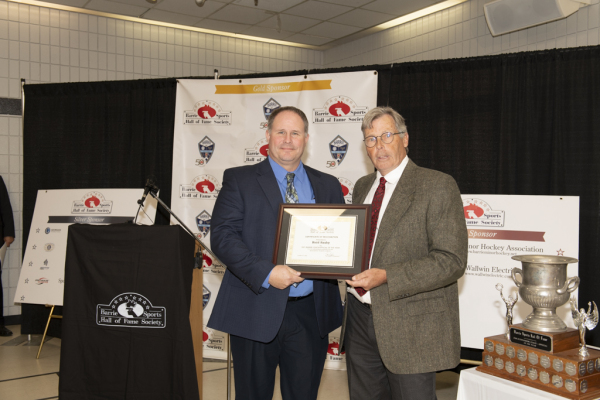 Reid Saxby has been coaching the Georgian College men’s volleyball team since 2002. He was assistant coach from 2002 to 2014. In 2015 he took on head coaching duties, leading his team to the Ontario Colleges Athletic Association (OCAA) championships, eventually winning a bronze medal in the 2019/2020 championships. He has won OCAA East Division Coach of the Year in 2017, 2020, and 2022. Saxby has been involved with the Barrie Elites Men’s Volleyball Program for many years, having coached Barrie Elites teams to the premier level in Ontario volleyball. He has coached several Team Ontario athletes as well.

While coaching in the Elites program, Coach Saxby was asked if he would be able to assist the volleyball program at Innisdale Secondary School. He agreed to help by coaching both the junior and senior girls’ volleyball teams. Prior to taking a position coaching at Georgian College, Saxby was the head pole vault coach at the University of Toronto from 1995 to 2001. While growing up in Simcoe County, Saxby was an accomplished high-performance athlete in both track and field and continued to compete while attending the University of Toronto. He still holds pole vault records in North Simcoe Track and Field as well as at the University of Toronto. As a coach, Saxby would ensure all his players received good training.

He also mentored many athletes on the aspects of coaching with the hope that they would assist others by taking on coaching positions in their future sporting efforts. He has always stressed the value of giving back to the community and sharing personal experiences for the love of sport. While involved in the coaching profession, Reid Saxby has worked professionally as a police officer in York Region for the past 20 years. Saxby was recently named Head Coach of the Canada Junior Boys Volleyball team for the 2022 Maccabi Games in Israel.