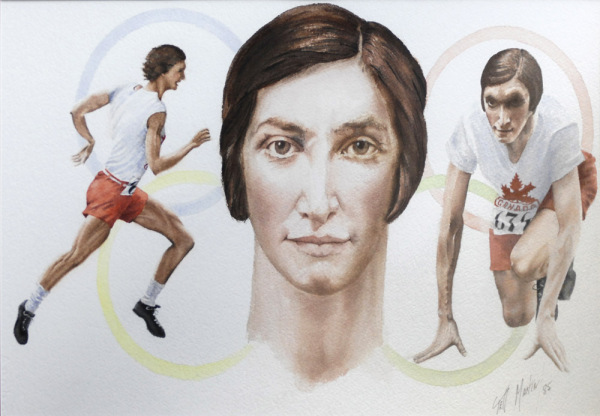 The daughter of Russian Jewish immigrants, Fanny came at a young age to Barrie, where she attended Victoria Public School and Barrie Collegiate Institute. There she excelled in softball and basketball, leading the latter team to the Simcoe League title. In 1922 she entered the Great War Veterans Association Track Meet at the Barrie Fair Grounds, and challenged all corners to a 100 yard race. When no girls took her up, she raced the boys, and with a three-yard advantage, won handily. Later that summer her family moved to Toronto, where Fanny joined the Patterson Athletic Club. An outstanding basketball player, Fanny led her Young Women’s Hebrew Association teams to several Ontario & Eastern Canadian Champion¬ships, and twice took them to the Canadian finals, where they lost each time to the legendary Edmonton Grads. As a hockey player, she competed for the YWHA, and for North Toronto, twice ladies’ City Champions. She, played shortstop. for the Hinde & Dauch team in the Sunnyside Ladies’ Fastball League, which won several City titles. Rosenfeld was also an accomplished lacrosse player, golfer and speed skater, and in 1924 won the Toronto Ladies’ Grass Courts Tennis Championship.

Her greatest achievements, however, came on the track. In 1923 she came to international prominence at the C.N.E. meet by defeating Canadian record holder Rosa Grosse and American & world record holder Helen Filkey, at 100 yards. She began to compete all over Canada & the USA, and was seldom beaten in the sprints. In 1926 the Patterson Club won the Ontario Ladies’ Track & Field Points Championships, despite Rosenfeld being its lone entrant. She won the shot (36’3″), 220 (26 sec), long jump (1616″), 120 yard low hurdles (16 sec) & discus (84’8″), while finishing second in the javelin (6118) and 100 yards (to Rose Grosse). In 1922 she set a Canadian discus record (12011″) that stood until 1952. At one time she held Canadian records in long jump (18’3″), standing broad jump (8’1″) and all the contested sprint distances. Selected to the 1928 Olympic team, the first year of competition for women, she anchored the gold medal 4×100 relay team to a new world record of 2:22.4, and won a silver in the 100, losing the gold to American Elizabeth Robinson on a disputed judge’s decision. Robinson’s 12.2 was a world record. Rosenfeld was credited with 12.3 in that hand- timed era, even though she may have won. She was also 5th in the 800 metres (an event she had never run), even though she was only entered to encourage young Jean Thompson, whom she refused to pass when the latter faltered. Arthritis forced permanent retirement in 1933, although she coached the Empire Games Track Team in 1932 and continued to coach softball. She wrote a sports column for the Toronto Globe & Mail for 20 years, and was respected for the range of events she covered effectively.