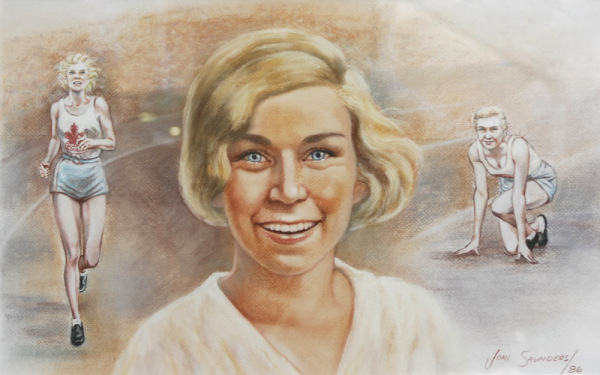 Often overshadowed in her hometown (by Bobbie Rosenfeld), and even in her own family (by “little” brother Red), Irene Storey nevertheless managed to carve herself a large niche in Canadian sports history. Born and raised in Allandale, she attended King Edward Public School and Barrie Collegiate Institute. Among the most important influences on her career was that of her mother, who recognized and encouraged her talent, starting Irene running at the age of 10. Mrs. Storey spent many long hours accompanying her daughter on evening training sessions in the park, and even served as her personal mana¬ger at the 1930 British Empire Games in Hamilton. The other important influen¬ces were her coaches: the fine Barrie sprinter Ross Cowan, Allandale YM-YWCA Director Charles J. Seitz, and finally the great Rosenfeld herself.

Irene was a fine softball and basketball player at BCI, but her run¬ning occupied most of her time. She first gained attention outside of Barrie in 1928, when, at the age of 13, she ran 13.0 seconds to defeat Grace Morrison and Mildred Fizzell over 100 yards. In September of the sane year she downed Fizzell and Wilda Fry in the CNE under-14 100 yards, and then won the Ontario Girls’ under-14 100 yards championship.

Storey had an outstanding season as a 15 year-old junior in 1930. In three days she won both the Ontario and Canadian junior 60 metre champion¬ships. She followed that up with a second in the CNE under-18 100 yards, com¬peting against girls two years her senior. She was invited to run in the exhib¬ition 60 metres for junior girls at the British Empire Games, and her winning time of 8.0 seconds equalled that of the Games’ senior champion, Rosa Grosse O’Neill. Irene took some lumps in 1931, but in 1932 she bounced back to win the Canadian intermediate 60 metre title, and finish second to Grace Davis in the 100 yards event.

By 1933, Irene Storey had achieved real national prominence. The powerful Toronto Lakeside Ladies Club recruited her for their sprint relay team. Although she ran with the team, Irene refused to join the Lakeside Club, preferring always to run out of Allandale, and her jacket, with the town’s name emblazoned on the back, became her trademark. The team of Storey, Fiz¬zell, Peggy Mathieson and Dot Brookshaw went undefeated in 1932 and easily won the Canadian Senior relay title. In 1934, Storey ran on the Canadian relay team at the World Games. At Toronto’s Centennial Sports Games, she entered the 220 yards for only the second time in her career, and smashed the Canadian record with a 25.5 clocking, beating Chicago’s 1928 Olympic 100 metre champion, Elizabeth Robinson, in the bargain. At the Canadian Championships/ British Em¬pire Games trials, Irene finished 3rd in the 200 metres when the favourite, Aileen Meagher, collapsed. The committee decided to place Meagher on the team anyway – in Storey’s place. The public uproar was such, however, that the committee partially relented and promised Storey a place on the team if she could pay her own way. A group of Barrie citizens, headed by Charles Seitz managed to raise the $300 (during the height of the Great Depression), and Irene made it to London, where she was eliminated in the 200 heats.

Storey continued to compete successfully through the 1930’s. When she retired from active competition, Irene Storey had some eight cups and seventy-five medals in her possession. She later moved to San Francisco where she raised a family and coached track and field and swimming. She continued to run road races in her 60’s.
Irene Storey Weber passed away March 19, 1986.