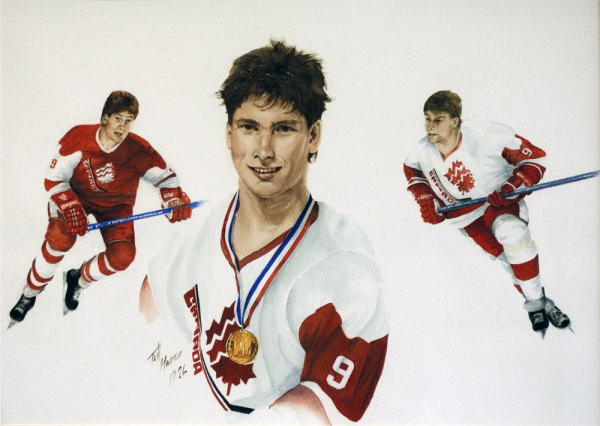 If Shayne Corson would have quit playing hockey at the tender age of twenty, he would have already accomplished something few other athletes are privileged to achieve – a world championship.

Corson was born in Barrie August 13, 1966. He is a product of the Barrie Minor Hockey Associa¬tion, where he was a leader on every team he skated for. He was a member of the 1975-76 Minor Atom OMHA Zone Champions. In 1978-79 his Major Peewees were OMHA “AA” Champions and they also advanced to the finals of the prestigious Quebec Peewee Tournament. In 1982 Corson earned a spot as an underage player with the Junior “B” Barrie Colts. He quickly established himself as one of the Colts’ top players, but scarcely two months into the season he suffered a broken leg. He returned to the Colts lineup in January 1983. In the summer of 1983 the Brantford Alexanders made Corson their first choice in the midget draft, and soon had him centering their top line. He scored 25 goals and 71 points in his OHL rookie season. The Montreal Canadiens made Corson their second of two first round picks, eighth overall, in the 1984 NHL entry draft.

After his first NHL training camp, Shayne was returned to his junior club (now the Hamilton Steelhawks), where he posted 27 goals and 90 points, earned a Player¬of-the-Week award, and was named a Third Team All-Star. More importantly, Coach Terry Simpson selected him to the 1985 National Junior Team. Against tremendous odds, Team Canada posted a 5-0-2 record, outscored the opposition by 30 goals, and won the 1985 World Junior Hockey championship.

Corson attended his second Canadiens’ training camp in the fall of 1985. He had a fine camp and opened the season on the Montreal roster, but was eventually returned to Hamilton.

Corson had an extremely slow start to his third OHL season, but was rejuvenated by his second shot at a world title, this one in front of hometown fans in Hamilton. As one of six veterans of the gold medal team, Shayne was counted on heavily, and did not disappoint. Corson was brilliant. He played superb defensive hockey, won Player-of-the-Game laurels, finished among the tournament scoring leaders, and was chosen the First Team All-Star left winger on the way to a 1986 World Junior silver Medal. In 1986 Corson was automatically inducted into the Barrie Sports Hall of Fame for his two medal wins in World Junior competitions

Corson became a regular with the Montreal Canadiens right out of junior, and played seven seasons with the storied club, before being traded to the Edmonton Oilers prior to the 1992-93 season. Two years later he was named the team’s captain. Corson played in the 1991 Canada Cup, and caught the attention of coach Mike Keenan, who brought the Barrie native to St. Louis in 1995, serving a short stint as that team’s captain. Partway through the 1996-9 7 season he was traded back to the Montreal Canadiens, in a deal involving Pierre Turgeon going the other way. Solid play the next season, playing on the Canadiens’ top line with Mark Recchi and Saku Koivu, earned Corson a spot on the 1998 Canadian Olympic Hockey team, the first time the best pro players in the world were allowed to play in the event. Corson played two more seasons in Montreal before signing as a free agent with the Toronto Maple Leafs, in the summer of 2000. With Toronto, he had a chance to play alongside friend and brother-in-law Darcy Tucker. No longer seen as an offensive star, Corson was considered to be a key defensive presence for the Leafs in their playoff runs of 2000, 2001 and 2002, checking the opposition’s top forwards.

Off the ice Corson has given back to the Community. Having lost his father to cancer in 1993, Corson has been a tireless fund-raiser for the cancer clinic at Barrie’s Royal Victoria Hospital. He has also helped create a special sports camp in the Parry Sound area for disadvantaged First Nations children.