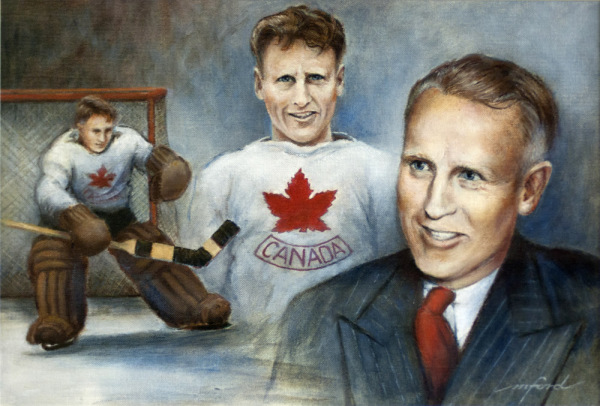 “Dinty” Moore was born in Barrie in 1900, the eldest son of Mr. & Mrs. J.J. Moore. He attended St. Mary’s School, and later Barrie Colleg¬iate Institute on Blake Street. He played hockey as a youth with his friends in Barrie, before trying out for the Barrie Colts in 1917. Moore had actually become a goaltender quite by accident, having wanted to try out as a centre man. Three days before the start of the season no one had presented himself as a candidate for the goalie’s job, so Dinty volunteered. Moore made the Colts that season, and backstopped them all the way to the 1917-18 OHA Junior finals against De LaSalle College. They split a two-game series, and lost on total goals, 10-8. That Colts team was one of the greatest in Barrie junior hoc¬key history, including as it did such stars as Moore, “Tex” White, “Babe” Bogardis and Dalton Meeking.

From there Dinty moved to Toronto and played 1918-19 with Athen¬aeums of the Toronto Hockey League. In 1919-20 he tended goal for the Tor¬onto Canoe Club, Canadian Junior Champions. Moore’s first crack at senior hockey was unsuccessful, so he spent a year with Milwaukee of the United States Amateur Hockey Association.
He returned to Canada in 1923 to begin a long stint with Port Colborne Sailors, where he became Canadian senior hockey’s most famous net minder. In 1926-27 the club won the OHA Consolation Series for Non-Group Winners, and in 1927-28 ‘won the OHA Intermediate Championship. Upon moving from Intermediate to Senior ranks, the sailors were OHA finalists three straight seasons 1930-1933. He played the 1934-35 season with British Consols of the Toronto Mercantile League before returning to Port Colborne in 1935 to finish his playing career. The highlight of that career had to be his selection to the 1936 Canadian Olympic Team which won a silver medal at Garmisch-Partenkirchen, Germany. Playing in all five games, Moore recorded two shutouts, and had only four goals scored against him. Some of his Olympic gear, including his jersey, is in Toronto’s Hockey Hall of Fame.

As outstanding as his playing career was, Dinty Moore is possibly remembered more for his contributions as a builder. His last few seasons with the Sailors were spent as playing manager, and during the 1930’s he served on the Executive of the Ontario Hockey Association. During that period he oversaw the expansion of the OHA junior series, organizing the Niagara District Junior “C” Series, as well as Intermediate “A” & “B” Series. He was elected OHA Vice-President in 1938 and served until 1941. He ascen¬ded to the Presidency in 1942, and held that office until 1945. He was one of the most active Presidents in OHA history, and was known as a fair and honest arbitrator who often argued the players’ cause. Moore was also a well-known and respected referee. One of the great contributions of his tenure as President was ensuring the supply of sufficient hockey equipment to overseas servicemen to guarantee the continued high level of performance.

Dinty served as Assistant Coach/Manager with the 1948-49 Sudbury Wolves who toured Europe and won the World Championships. In 1958 he was awarded the Gold Stick, the OHA’s highest form of recognition for outstan¬ding achievement. In 1962 he was made a Life Member of the OHA for his long, faithful and valuable service. The F.W. “Dinty” Moore Memorial Trophy is awarded in his memory to the most outstanding rookie goaltender in Ontario Major Junior hockey. Dinty Moore died in 1976.