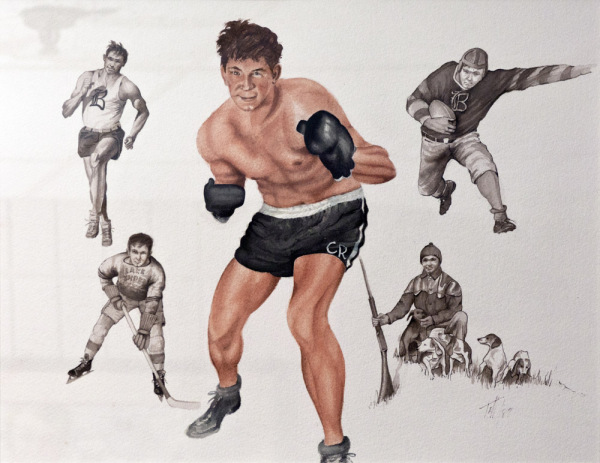 Herb Dyment was born and attended school in Barrie. As an all- around athlete, he became something of a local legend. He was a star halfback for the Barrie Collegiate rugby squad, and skated for the Barrie Colts junior hockey club. An outstanding track man, he posted times of 10.1 for 100 yards and 23.1 for 220 yards. He also held the Simcoe County 440 yard record.

Herb was not only a great athlete; he was also a rather rambunc¬tious youth. It was perhaps inevitable that his natural aggressiveness led him to the sport of boxing, and that he would be a natural. He conpiled an outstanding amateur record boxing in the Barrie and Toronto areas, and his bruising, straight-ahead style made his a crowd-pleaser. He left to work for Lake Shore Mines in Kirkland Lake in 1934, and continued his ama¬teur career under the conpany’ s sponsorship. Dyment’ s weight fluctuated in the general neighbourhood of 165 lbs, but he fought fighters from 147 to 175. He won the Ontario Middleweight and Light Heavyweight Championships, as well as the 1936 Canadian Light Heavyweight crown.

The great disappointment of Dyment’s career came in the 1936 Olym¬pic trials, something for which he had been aiming for a long time. In the semi-final bout against former Canadian cbarrion Gaston Geichel, he broke his left wrist – a devastating blow to a southpaw. He fought the final with his wrist in a splint, and, one-handed, dropped a heavily dispu¬ted split decision to Oliver Shanks, a man he had defeated three times in as many attempts.

In the wake of that disappointment, Herb bopped a freight for England and a job playing professional hockey. While there, he hooked up with a Manchester fight manager named Tan Hurst. In an effort to retain his amateur status in Canada, Dyment and Hurst care up with the moniker “Cal Rooney,” and that was the name under which be fought all over Europe. Once he got a taste of the money to be made in the professional prize ring, Herb abandoned his hockey career.

Given the fact that he fought under two different names, that the maintenance of accurate records during this period was not a priority, to put it delicately, and that he fought in several different weight clas¬ses, it should be no surprise that it is difficult to pin down exactly what Dyment’s professional and amateur records were. One account has his pro and amateur combined record at 82-4. This is unlikely since he almost cer¬tainly fought more than 100 times as an amateur, and lost more than four fights before leaving for Kirkland Lake. His European professional record has been listed at 47-3, and this bears up under scrutiny. Such a record is stunning in any era. Dyment fought and defeated British champions while in England, including Scottish cruiserweight champ Tariny Henderson. He was himself English Northern Area Cruiseright Champion. He never got a shot at British Empire titleist Jack McAvoy, as they belonged to the same stable. After a few vicious sparring sessions, MAvoy wanted no part of Dyrnent.

World War Two ended Dyment’s boxing career and began a 25-year stint with the air force as a physical education instructor. He was elected to the Canadian Boxing Hall of Fame in 1985.