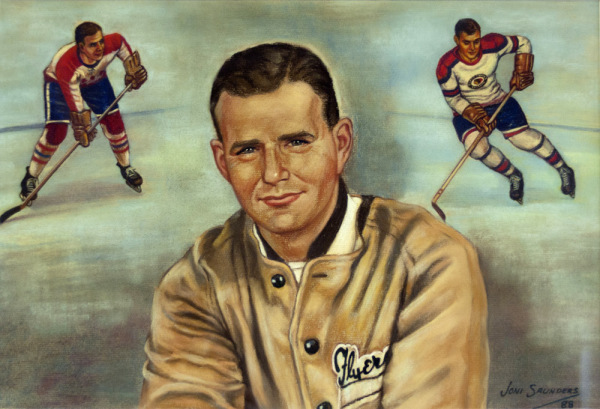 Born in Kingston, Jack Dyte moved to Barrie as a youngster when his father was posted to Camp Borden. A gifted all-around athlete, Dyte was a member of the Barrie Central (BCI) basketball, track & field and rugby teams. Captain and leading scorer as a junior halfback, in 1936 he played for both the Jr. and District Champion Sr. clubs. In 1937, as an All-Star centre-half, he led BCI to the District and COSSA titles. He later played senior ORFU football with Tor¬onto Indians, Toronto Oakwoods and Hamilton Wildcats.

Dyte played lacrosse in Barrie (junior & intermediate) and Collingwbod (Jr.), as well as a stint in 1942 with the Sr. Montreal Shamrocks. An outstanding softball and baseball catcher, he spent every summer playing both competitively. For many years an all-star in Barrie & Simcoe County leagues (soft¬ball mostly with Harmony Grill & Eniris Electric, baseball with Barrie Cubs Jrs. and Barrie Wolves Intermediates), he also played Sr. softball in Toronto & Niagra Falls, Sr. baseball in Quebec, and semi-pro baseball in Baltimore. Collingwood picked him up to catch for the great “Smokey” Smith during their OBA title drive.

Jack Dyte’s hockey career reads like a travelogue. He jumped from St.Mary’s Church League team at age 14 to Barrie Colts Jr.”B” in 1933. He played five seasons with Colts, the latter three as captain, helping them to four group titles and a pair of OHA Championships (including Barrie’ s first ever in 1934-35). In his final junior season he sustained a skull fracture which was to forever give him vision and hearing problems. Forced to undergo an operation to remove a blood clot in his brain, he was dropped from Toronto Maple Leafs’ reserve list, even though he courageously returned to finish the season. When Dyte left Barrie he played for Niagra Falls’ Sr. “B” OHA champs, then turned pro in the EHL, spending three years with Baltimore Orioles and Johnstown Bluebirds. He spent time with Montreal Royals Sr. club., and cracked the Chicago Black Hawks lineup in 1943. After 27 games with the Hawks, he was sent down to the MIL Providence Reds, then sold to Buffalo Bisons (where he played on a Calder Cup Champion). Jack also saw time with Hap Emms’ St. Louis Flyers. When Eddie Shore reacquired him in Buffalo, and tried to send him to the USHL Dallas Texans, Dyte quit to become Recreation Director in New Liskeard. He served as player/coach for NOHA intermediate New Liskeard Legionaires, North Sydney Victorias of the Cape Breton Sr. loop, and the intermediate “A” Temiskaming Royals.

In 1950 Hap Emms recruited Dyte to set up and administer the Barrie Flyers Minor Hockey Association. Through 1950-51, Dyte as Director, personally kept performance and conduct charts on nearly 300 minor hockey players, established the standards of conduct by which all boys were expected to abide, supervised all BFMHA games, refereed when it was required, coached Barrie Flyers Jr. “B’s” (based in Midland), coached the bantam and midget CMHA Select teams (the former to a provincial title), and played on and coached Barrie Flyers baseball and softball entries.

He resigned late in 1951 to play and coach for Orillia Sr. Terriers. He later coached Simcoe Gunners to an OHA intermediate “A” title, Orillia to the OHA Sr. “B” crown, guided the Orillia Jr. “C” team, and was twice 1st All-Star coach while with the Barrie 7-ups Sr.”A” club 1964-66. He resigned in 1966 to devote more time to minor hockey in his adopted home of Orillia.