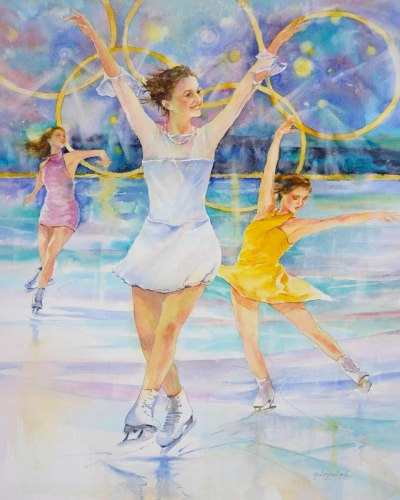 Jennifer Robinson began her skating career in Windsor when she was 8. She landed her first axle at 10 and eventually went on to became one of Canada’s top ladies figure skaters. She moved to Barrie at 13 as a member of Mariposa School of Skating under the guidance of Barrie Hall of Famer Doug Leigh and coach Michelle Leigh. When she arrived in Barrie she came as a young girl chasing a dream. Through hard work, determination and talent that dream soon became a reality. Jennifer became the Junior Canadian Champion in 1994. She began competing at the senior level in 1995 and dominated the Canadian Ladies Singles Championships for the next 10 years. She reached the podium in all ten years. She captured her first Canadian Ladies Championship gold medal in 1996. She repeated this feat in 1999, 2000, 2001, 2002 and 2003. In 1995 she placed second and captured bronze in 1997, 1998 and 2004.

Robinson competed in eight Women’s World Figure Skating Championships. At the 2000 Championship in Nice, France, she placed eighth. In seven Skate Canada International competitions she captured a bronze in 2000 and placed fourth or fifth on four other occasions. Robinson also realized another life-long dream of competing in the Winter Olympics when she placed seventh at Salt Lake City in 2002.

She has also competed in Skate America, the Nations Cup, Trophée Lalique in Paris, Cup of Russia, Cup of China and the NHK Trophy event. After she finished her amateur skating career, she skated professionally with Stars on Ice. Robinson has performed with the Elvis Stojko Tour of Champions and Celebration on Ice. In the 21-city Skate the Nation tour she entertain audiences across Canada. Though all her success made her a household name, and her competitions took her around the world to many great cities Jennifer embraced Barrie as her home and at the age of 19 bought her first home in the city.

She is still involved in skating as a coach with the Mariposa School of Skating. Robinson has also done some on-air radio work at CIQB-FM as well as hosting a news show for Rogers Cable television station in Barrie. She was a commentator at the 2010 Winter Olympics in Vancouver. She gives back to Barrie by being actively involved with many local community charities. Upon her return, to Barrie, from the 2002 Olympics the City of Barrie honored Jennifer with a plaque for bringing honour and recognition to the city. She also received the “Paul Hams Fellowship”, the highest honour that the Barrie Huronia Rotary Club bestows for her unselfish contribution to local community charities.

Jennifer Robinson lives in the Barrie area with husband Shane Dennison and their one year old daughter. In October 2010, Robinson was elected to Barrie City Council, representing Ward 8 in the south-central area of the city.