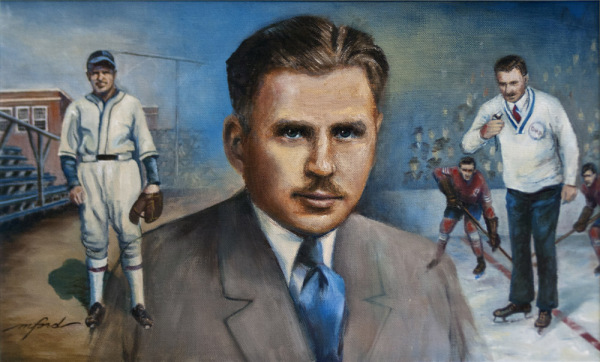 Barrie native John Dobson was a fine all-around athlete. He played rugby both at BCI and with the Barrie Jr. ORFU club. He was a swift and versatile runner who won events ranging from 100 yards to the mile at high school and regional meets.

He worked very hard to promote hockey in Barrie. During his playing career he saw action with Collier United Church Baracas, Barrie Colts Jr. “B,” Barrie OHA Intermediates, and in the Town League with YMCA, Allandale CNR and Underhill’s (Shoe Factory) Hornets. Several of those teams won titles. He coached the Barrie Cubs Jr. “C” 1937-38. Throughout the 1930′ s and 1940’s he served on the Executive Committee of the Barrie Colts Jr. “B” and Barrie Wolves Int. He was on the Barrie Church League Executive for many years, and was President of the Barrie Town League 1926-1937. He was a referee through three decades at various levels including Church & Town Leagues, OHA mt. & Jr., interscholastic and minor hockey. At the memorable 1942 Juvenile Championships between Collingwood and Penetang, a donnybrook broke out involving players, coaches, spectators and police. When turning the arena lights out failed to halt the imbroglio, Dobson had the national anthem played continuously until the combatants got tired of stopping to stand at attention.

It does not overstate the case to call John Dobson “Mr.Baseball” in Barrie. An excellent player, he graduated from the junior ranks to star for the Barrie Intermediate club from 1923-1939. He played all the infield positions when called upon, but was known mostly as a sure-handed first baseman who hit for average and power. The team won many league, County and group titles, including a string of seven straight Simcoe County crowns 1930-1936.

Dobson did not wait to retire as a player to contribute to the game in other ways. He was a player/coach with the Intermediates several times in the 1930’s, including the great 1930 team which included Hap Erms, Cotty Tribble, Bus Clarke and Archie Thompson. He coached the Jr. Cubs, twice group champions, 1936-1939, and guided the town juvenile team during the same period. In 1935 he conceived and organized the Juvenile Church League, designed to develop players for the town’s junior. & intermediate entries. Elected President, he also umpired in that league (something he did for many years in other leagues as well). Several times the intermediate club’s league representative, he was Secretary-Treasurer for both his team and the North Simcoe League 1930-1935. When base¬ball slumbered during the war years (due to equipment shortages, lack of gasoline to travel, and the popularity of softball), Dobson worked hard to re¬establish the game, and served on the Officials’ Committee of the new Grey¬/Simcoe League in 1947. Between 1939-1949 he organized local camps for young players, arranging for Toronto Maple Leafs and Philadelphia Phillies players to act as instructors. In 1933 he was elected OBA District Convenor, and in 1935 was the first Barrie man ever elected to that group’s executive, a position he held for many years. Whenever the game’s health was threatened, Dobson intervened. It was not unusual during the Depression years to find him mending discarded balls, or organizing groups to work on the park filling holes, pul¬ling weeds, or patching the screen. He is in great part responsible for the continued health of the game in Barrie.