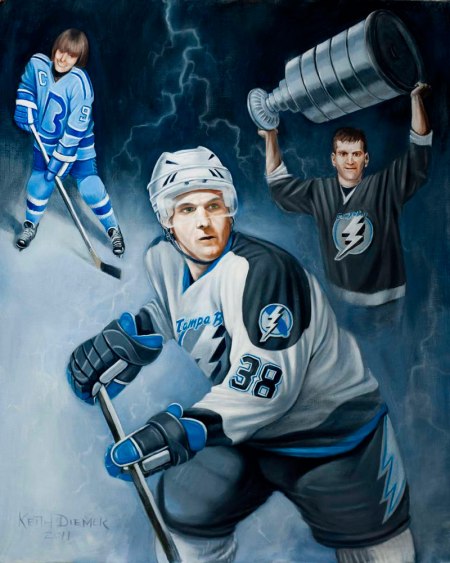 Darren Rumble was born Jan 23, 1969 in Barrie. While having much childhood success in soccer (BOMSA championships), track and field (King Edward, Hillcrest and Codrington PS), football and rugby (Eastview SS) and, later, golf (BAGS tour), Darren’s lifetime passion for and involvement in hockey began on an outdoor rink at Queen’s Park when he was three. From there he progressed through Barrie Legion Hockey, Barrie Minor Hockey (including a memorable trip with the Tim Horton Minor Midgets to Sweden in 1984) and finally, to the 1985/86 Barrie Junior B Colts. Rumble was drafted 9th overall by Kitchener in the 1986 OHL draft. He went on to have three great years with the Rangers. In his final season he helped the Rangers finish first in the league. He was also selected to the first team OHL all-star defenseman position.

In the 1987 NHL Entry Draft he was drafted 20th overall by the Philadelphia Flyers. After three years with Philly’s AHL Hershey Bears, being awarded the Bears’ Best Defenceman and the Top +/- Player in ’91, Rumble was selected in the 1992 NHL Expansion Draft as the Ottawa Senators’ second defenseman pick. He played two seasons with Ottawa but the fledgling Senators were struggling so Rumble found himself back in the minors with the Prince Edward Island Senators. In the 94/95 AHL season, with the PEI Senators, he led the league with a +45 and a Second All-Star team selection. Philadelphia reacquired Rumble in 1995. In 1997, playing for the Philadelphia AHL team he was awarded the Eddie Shore trophy as the AHL’s Best Defenceman and was chosen as a First Team All-Star.

He played one season, In 1997, for the Mannheim Eagles in the German and Euro Leagues. Rumble returned to America in 1998 and for the next seven years he continued to share ice times with NHL, AHL and IHL teams. Overall, his 614 AHL games netted him 77 goals and 317 assists for 394 points. His NHL totals with four teams (Philadelphia, Ottawa, St. Louis and Tampa Bay) include 193 games resulting in 10 goals and 26 assists for 36 points.

After pursuing his craft throughout North America he was acquired by Jay Feaster and the Tampa Bay Lightning in 2002. He was with the Tampa organization when they won the Stanley Cup in 2004. With his name engraved on the Stanley Cup he brought it to Barrie where the celebrations resulted in a $25,000.00 donation to the Royal Victoria Hospital. Rumble played his final season with the Springfield Falcons of the American Hockey League where he took on the role of assistant coach. In 2007, he joined the Norfolk Admirals of the AHL as an assistant coach. In July 2008, the Tampa Bay Lightning named Rumble Head Coach of their AHL affiliate Norfolk Admirals. After leaving Norfolk he served as Associate Coach with the Lewiston Maine-iacs (QMJHL) and is presently Assistant Coach with the Seattle Thunderbirds of the (WHL).