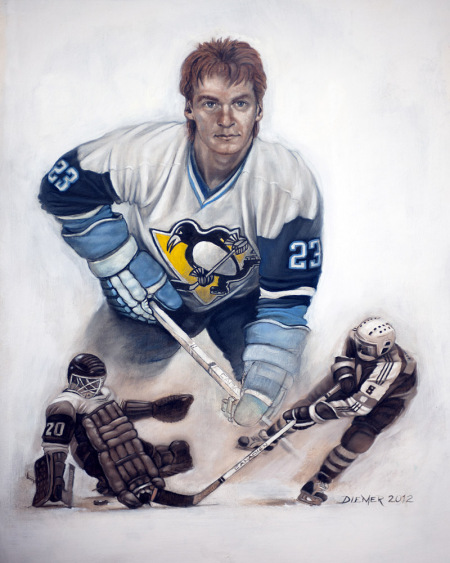 Born in Barrie, Jim Hamilton played his Minor hockey with the Barrie Minor Hockey Association. He was drafted by the London Knights and played on their OHL team from 1973 to 1977. He was Pittsburgh Penguins first choice, 30th overall, in the 1977 NHL entry draft. The Winnipeg Jets also selected him in round 7, 64th overall, in the 1977 WHA amateur draft. As a rookie, he signed with Pittsburgh because he felt that the coaching staff would provide a good learning environment. Hamilton, however, spent most of his career commuting between the NHL and Pittsburgh’s minor league affiliates. Unfortunately, four serious injuries between the 1979-1980 and 1982-1983 seasons interfered with his career. He never spent a long enough stretch with the Penguins to find his groove, although he turned in some good performances. During the 1978-1979 playoff series against Buffalo, Hamilton had three goals in four games. He helped set an NHL record by scoring a goal five seconds after a Buffalo goal.

In spite of his hard work, Hamilton continued his roller coaster ride back and forth to the minors. Between 1977-1978 and 1984-1985, Hamilton played a total of 95 games in a Pittsburgh uniform. He ended his NHL career with totals of 95 games, 14 goals, 18 assists, 32 points and 28 penalty minutes. His minor league career was more impressive. He played 382 games for AHL and IHL teams, compiling a record of 166 goals, 158 assists for 324 points. He retired after playing with four different teams during the 1984-1985 season.