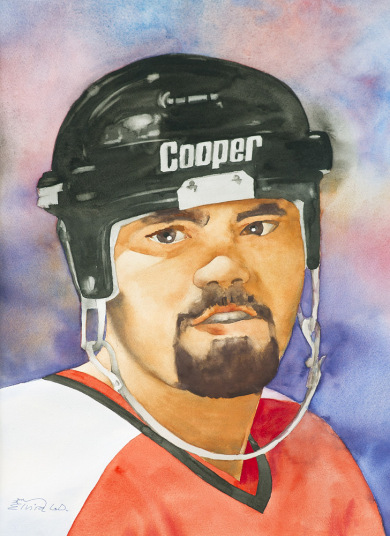 Born in Toronto, Sandy McCarthy moved to Barrie’s Allandale area at a young age. He played at the AA level in Barrie unable to crack the AAA lineup. This did not deter him from reaching the NHL. McCarthy played Junior C with Midland for one year, and moved on to Tier II Junior A in Hawkesbury. He played with QMJHL’s Laval Titan from 1989 to 1992. The team won the Quebec provincial championship in 1990 and played in the Memorial Cup.

In 1991, McCarthy was drafted by the Calgary Flames. McCarthy apprenticed with the Salt Lake Golden Eagles of the IHL in 1992-1993. In 1993 he joined the Flames. His effectiveness as an enforcer, a strong fore-checker and a solid defensive player allowed him to stay in the NHL without ever going back to the minors. McCarthy also played with Tampa Bay, Philadelphia, Carolina, New York Rangers and Boston. In his 735 games, 15 season NHL career, McCarthy recorded 72 goals, 76 assists and 1554 penalty minutes. Sandy always returned home to Barrie in the off season where he lived till this past year. Giving back to the community, he coached his daughter’s Barrie Sharks team for 2 seasons. He is currently still involved in the game as the head coach of the Alliston Hornets Junior C team.