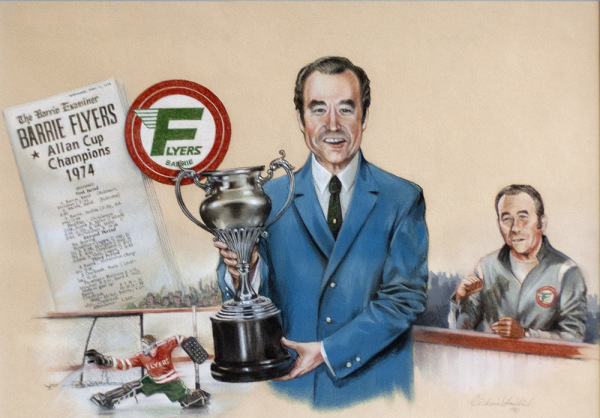 Although not a Barrie native, Jim Short has contributed more to the Barrie sports community during the 30 plus years he has lived here than most people do in a lifetime. Little in sports is accomplished without the hard work and assiduous judgment of someone behind the scenes. It is that role that Jim Short tirelessly filled for many years.
Short moved to Barrie from Brantford in 1959 when his employer relocated, and wasted little time becoming involved in Barrie athletics. He served on the Executive of the Barrie & District Senior Softball League for seven years, five of them as President. He also formed a midget softball team in 1962, coaching them until 1964. Many of these players went on to compete in the senior league.

Short was a long-time member of the Barrie Country Club, and served on most of its committees. From 1984 to1988 he served as Greens Chairman, Vice-President and President. During that period the golf course was improved and re-equipped to rival any north of Toronto.

The service for which Jim Short is most recognized in Barrie is in the sport of hockey. He coached the Barrie Bantam team 1960-61 and 1961-62, winning the OMHA Championship in the latter season. He coached the Co-Op Midgets in 1962-63, and again in 1963-64, when they were OMHA Finalists.

Perhaps most notable, however, is Jim Short’s towering contribution to the Barrie Flyers’ 1974 Allan Cup victory, which was the result of nearly a decade of hardship and tireless effort. When the Barrie 7-Up executive announced its mass resignation shortly prior to the 1965-66 season, it appeared that senior hockey was dead in Barrie, scarcely five years old. Several Barrie sportsmen stepped into the breach, including Jim Short, who accepted the job as manager. The group steered the club through its first full-fledged season of Sr. “A” competition on an almost makeshift basis. Once the season ended, the process of resurrecting a floundering franchise began in earnest.

The team’s name change to “Flyers” was symbolic, but was an important public relations move – one which sought to create the image of a winning tradition. The financial issues were more difficult to address, but with Short promo¬ting the team ceaselessly, the Flyers managed to struggle through nearly a decade of community indifference.

Meanwhile, the product on the ice commanded much of Short’s attention. He tapped the Metro Jr. “B” loop for young legs, mixed in a steady diet of Barrie area veterans, and built around the scoring talents of Corby Adams. A succession of coaches improved the team until Short settled on player/coach Darryl Sly. It was during this period that Short largely handled the bench-coaching duties, allowing Sly to concentrate on his role as a player during games.

The Flyers lost OHA finals to Galt in 1969 and Orillia in 1973, but reached the Allan Cup finals in 1972, losing to Spokane. Finally, in 1974, with the final pieces added, the Flyers fought to the Allan Cup finals again, this time defeating Cranbrooke Royals four games to two. The Flyers also represented the CAHA in the Star Cup in Goteberg, Sweden in 1972-73 against Swedish, Czechoslovakian, German & Soviet competition.