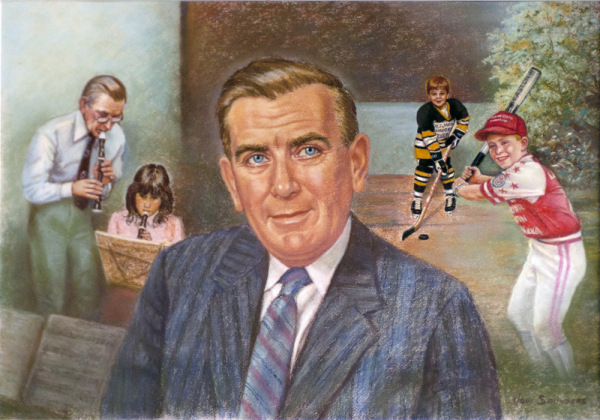 Win Law was a teacher who came to Barrie in 1940 after spending six years in a one-room school at Thornton. He started his career in Barrie at Victoria School, and in 1942 joined the Royal Canadian Air Force, serving as an instructor at Dunville until 1945.

In 1945 he was appointed Principal of King Edward School, and it was in Allandale that his involvement with Barrie sports began. The principal in Allandale was expected to serve as Sunday School Superintendent, Church Hockey League Convener, and Scout Leader. Win took all of these tasks seriously, and did them all well.

He coached all three teams in the Allandale Church League, and had various successes with the hockey teams from St. George’s Anglican, Burton Avenue United, and Essa Road Presbyterian Churches. When the winner of this league went on to play against the Barrie winner, they were always well-prepared to win. The Barrie/Allandale rivalry was stiff, and Win Law’s teams always held up their end.

To keep the teams on the ice, Win spent many hours with parent helper David Coulson flooding and maintaining the ice surface. It was not uncommon to see the King Edward teacher, principal, coach and organizer pulling his typewriter home on a toboggan so that office work and sports schedules could be prepared during the late evening hours. He also organized, coached and managed baseball teams during the summers, and under Barrie’s first Recreation Director, Ken Robinson, was the Summer Director for the Barrie Recreation Committee. Law held that position through Robinson’s mandate, and continued to serve in that capacity under Robinson’s successor, Gary Stoner.

During Hap Emms’ years with the Barrie Flyers Jr. “A” Hockey Club, Win Law helped organize the junior farm system, and spent three years coaching at the Midget “A” level with some success – the team he coached and managed won the All-Ontario Midget Championship for 1947-48.

During this era Win Law also organized the Barrie Minor Athletic Club, and developed baseball to the Juvenile level. His Juvenile “A” team played in the South Simcoe League, and several times reached the provincial O.A.B.A. finals. He was for several years Chairman of, and coach within, the Barrie Minor Baseball Association, forming that organization along with the late Bill Garner and the late John Dobson.

Law was also involved with senior baseball at a high level, and helped organize, along with John Dobson, clinics taught by professional players of the Toronto Maple Leafs and Philadelphia Phillies organizations. He was well respected as a teacher of the game, and he and Dobson were co-coaches of the 1949 Ontario Senior All-Star Baseball Team.

Win Law played baseball, soccer and hockey as a youth, and brought a love of sports to his work. His demands for fair play and excellence went beyond the playing field and into the classroom, and he was respected as a friend and confidant by many of his students.

He was a founding member, and the former Membership Chairman, of the Barrie Sports Hall of Fame.