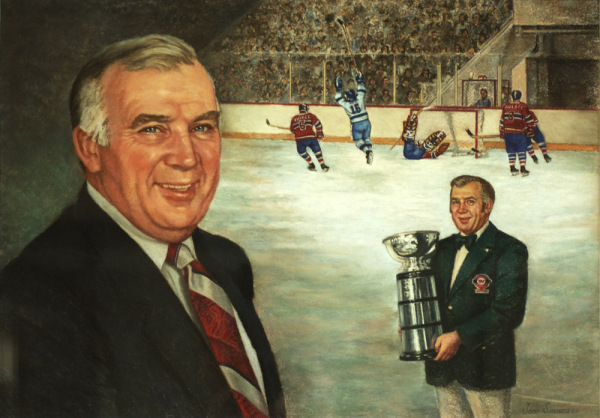 Although born in Orillia, Lloyd Pearsall moved to and played all his minor hockey in Barrie. He joined the Barrie Flyers Junior “B” team for the 1949-50 season, then made the Junior “A” Flyers in 1950-51. That club brought Barrie its first Memorial Cup Championship. In 1951-52 he joined the Montreal Junior Canadiens for his final junior campaign.

These days, he is best known in Barrie as one of the community’s most successful minor hockey coaches. For nearly twenty years, beginning in the mid-1960s, he was either a coach or assistant coach with teams ranging from Minor Novice to Major Midget. He won countless league and tournament championships, a number of OMHA titles, as well as the 1981/82 International Silver Stick Championship for Major Midgets.

Pearsall joined the team with which he is most associated as an assistant coach in 1972. The 1972-73 Major Bantams had an outstanding season, displaying much of the promise that was later to manifest itself. He became coach of the Minor Midgets in 1973-74, guiding them to both the OMHA “AA” Championship, and to the International Silver Stick title. In 1974-75, Pearsall guided the Co-op Major Midgets to the Wrigley Championship, emblematic of national Midget supremacy. The club went on a tour of the U.S.S.R., finishing with a 1-2-2 record. Almost all of those players went on to play some level of junior hockey. Two, Shane Pearsall and Rob Garner saw very brief N.H.L. action, while two more, Doug Keans and Mike Gartner, achieved some prominence in the National Hockey League.

Lloyd Pearsall’s philosophy during that 1974-75 season, and through¬out his minor hockey coaching career, can best be summed up in his own words: “I believe you try to win – that’s the objective of the exercise,” he says. “But the real challenge is what you are going to do to get there, in terms of skill development and character development.”

Lloyd Pearsall rejoined the ranks of the Barrie Minor Hockey Association coaching staff in 1990-91, when he served as an assistant coach with the Major Midgets, who lost the fifth and deciding game of the OMHA finals to the Hamilton Huskies. The Major Midgets made a successful tour of Czechoslovakia and the U.S.S.R. in December, 1990, which was a homecoming of sorts for Lloyd Pearsall.