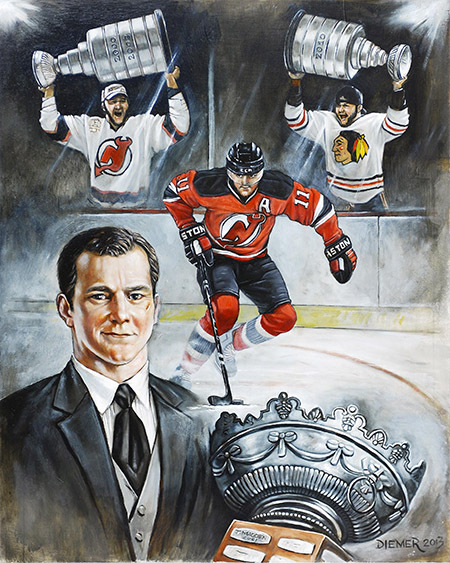 John Madden was born in Barrie. He played for various minor league teams including the Jr. “C” Alliston Hornets and the Jr. “B” Barrie Colts. He was drafted in the 1992 OHL Priority Selection by the Niagara Falls Thunder. Madden did not report to Niagara Falls, choosing instead to pursue an NCAA scholarship. John spent the next four years with the University of Michigan where he had three 20+ goal seasons. He was also named to the CCHA First All-Star Team and the NCAA West First All-Star Team. Madden also set an NCAA career record for most shorthanded goals with 23. In June 1997, John signed as a free agent with the New Jersey Devils of the NHL. His first two seasons were spent with the farm team, the Albany River Rats. Here Madden set a team record for assists and points. John won a permanent roster spot with New Jersey in 1999 and remained with the team through the 2008-09 season. He was regarded as one of the NHL’s best defensive forwards, winning the Frank J Selke trophy for best defensive forward in 2001. Madden also finished second in voting for this award in 2003, 2004, and 2008.

While with New Jersey, John was a member of two Stanley Cup championship teams (in 1999-2000 and 2002-03). In July 2009, Madden joined the Chicago Blackhawks where he won his third Stanley Cup championship. John Madden finished his NHL career in Sept. 2012 after spending the 2010-11 season with the Minnesota Wild and the 2011-12 season with the Florida Panthers. After retiring from the NHL, John accepted a position with the Montreal Canadiens scouting and evaluating amateur free agent talent in US College hockey.