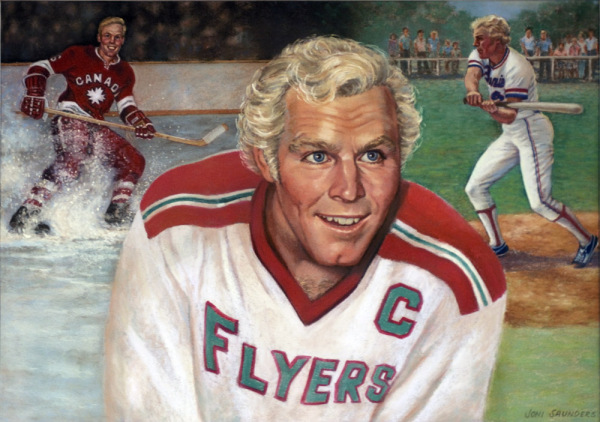 Adams’ statistics at Hockey Data Base

Minesing native Corby Adams is generally regarded as one of the finest athletes ever produced in the Barrie area. He played all of his minor hockey in Barrie, captaining the 1956-57 Midget team, and playing for the 1957-58 Juveniles, OMHA. Juvenile “A” Champions. In 1958-59 he was a member of the Newmarket Smoke Rings Junior “C” club, and in late December of 1959, was called up from the Smoke Rings to join Hap Emms’ Junior “A” Barrie Flyers.

Adams received a full hockey scholarship to Clarkson College in Potsdam, New York, where he graduated with a degree in Business Administration. He played three years with the Golden Knights, making the league All-Star team in his final two seasons, and being named, in 1963-64, to the All-America Team. Clarkson won the 1963-64 E.C.A.C. Holiday Tournament; Adams was named Tournament M.V.P. and to the All-Star Team. In three seasons he scored 155 points and led the Knights to a 59-15-11 record.

Upon his return to Barrie, Adams joined the Barrie 7-Ups Senior “A” club, where he remained when they became the Barrie Flyers in 1966-67. Adams’ illustrious senior hockey career lasted into the mid-1970’s. The big centre/left wing captained the Flyers for 8 years, and led them to four O.H.A. titles, and two Allan Cup Finals; they won the National Championship in 1974. Adams’ name appears on the Allan Cup in three other places, as he was picked up for successful runs by Gait, Orillia and Brantford. Adams was named to eight All-Star teams as a senior hockey player, won a pair of scoring champion¬ships, and was twice league M.V.P.

In 1969 he joined the Canadian National Team for a tour of eastern Europe. Only Hockey Canada’s decision to opt out of the world championships kept Adams from playing for his country in that event. He was named to the 1971 O.H.A. Selects squad which faced the U.S.S.R. Selects.

Also a brilliant fastball player, whose senior career began in 1957 at 16, and continued for more than 30 years, Adams has played on more than a dozen Barrie & District and Barrie Major Champions with Minesing, Barrie Plaza, Lakeview Dairy, Beatrice Foods and the Barrie Downtowners. His American Hotel team won the O.A.S.A. Championship. He was league and playoff M.V.P. on a number of occasions, and won more batting championships than any other player in league history.