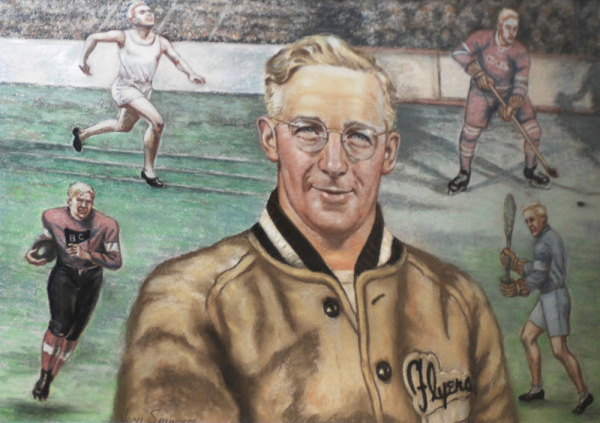 Born in Barrie in 1910, Hank-Partridge loved, and was involved in, sports his entire life. He participated, at one time or another, in base¬ball, softball, basketball, boxing, football, rugby, track and field and hockey.

Partridge began his hockey career in the old Barrie Church League with the Collier Street United Church Baracas, who won two Senior Church championships. From there, at the tender age of 15, he joined the Barrie Colts Juniors. He played five seasons with the Colts, helping then to three consecutive Georgian Bay Group Championships 1927-29. In 1929 he enlisted with the R.C.A.F. Permanent Force, spending six years playing hockey, as well as lacrosse and rugby with the R.C.A.F. Flyers at Camp Borden. Hank left the Air Force in 1935, accepting an offer to work and play hockey and lacrosse for the Dome Mines in South Porcupine. He played there from 1935 to1939, even fit¬ting in a championship season with the South Porcupine Monarchs Intermediates.

Partridge re-enlisted in the R.C.A.F. when World War II broke out, and his hockey career took him through Camp Borden again, Belleville and R.C.A.F. Bomber Command Stations in England at Melville and Linton-on-Ouse (in Yorkshire). There he played with several N.H.L. greats including Johnny Mowers, Alf Pike, Woody Dumart, Bobby Bauer, Milt Schmidt and Sid Abel.

Partridge enjoyed, and excelled at, a number of other sports. He played rugby at Barrie Collegiate, and was a member of the track and field team, winning the Grafton Trophy as Senior Field Meet Champion in his final year. He was a tough rugby football performer, playing with junior O.R.F.U. with Barrie, and six years in the O.R.F.U. Senior loop with Camp Borden.

An outstanding lacrosse player, he played Junior in Barrie, Senior and Intermediate in South Porcupine, and coached and played for the Station team in England. He took that club to two R.C.A.F. title games, winning once. While playing with the R.C.A.F. team at Camp Borden, he led them to a number of Tri-County League titles 1931-1935.

When the war ended, Partridge returned to Canada and convalesced for over a year at Gravenhurst Sanitarium, the result of a lung condition developed during the war. Once he returned to Barrie, “Hap” Emms asked him to become Trainer of the new Junior “A” franchise in Barrie. Partridge took a number of courses, and sought advice from every conceivable source. He was the Flyers’ trainer 1947-1960, when the team removed to Niagara Falls, training along the way a number of other professional trainers including his son Lee, Ken Carson and Barry Keast. He became highly respected in the profession, and besides serving the Flyers, worked in the training camps of the Toronto Maple Leafs, Boston Bruins, Hershey Bears and Buffalo Bisons.

Throughout the 1960’s and 1970’s, Hank Partridge was involved in Senior and Intermediate hockey with the Barrie 7-Ups and Flyers, eventually seeing the latter win a pair of Allan Cups, to go with the two Memorial Cup teams he trained. He served these clubs as President, Treasurer and Secretary.

Hank Partridge was a founding member of the Barrie Sports Hall of Fame Society in 1985.