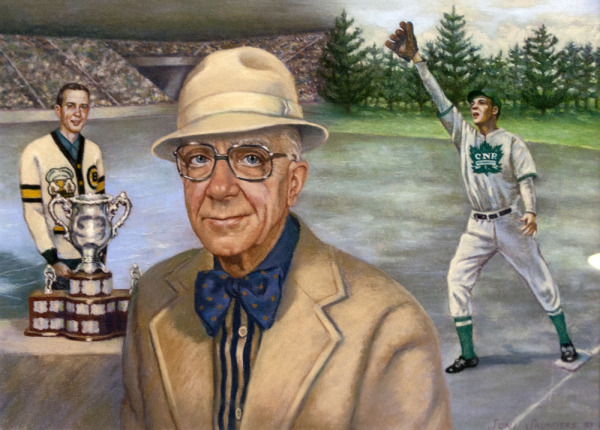 Archie Marshall was born in Barrie on December 24, 1910, and attended King Edward Public School. He passed his entrance exams at the age of 11, and attended Barrie Central Collegiate Institute. There, and at the University of Toronto, he pursued an education in business administration, which he applied to his employment with the C.N.R. at Allandale, with the Barrie P.U.C., and with Pigott Construction in Hamilton, Montreal and Barrie.

Marshall was a perennial all-star in Simcoe County softball leagues, playing first base for Allandale C.N.R. and the Allandale Imperials. These clubs won a number of Simcoe and Centre Simcoe League championships through¬out the 1930’s and 1940’s. In 1935, he and brother Earl were picked up by Allandale’s arch-rival Roxy Aces of Barrie, in order to strengthen the team for its successful run at the Ontario Intermediate Championship. Marshall also played baseball with some of the outstanding Barrie teams of the 1930’s.

Much of Archie Marshall’s association with sports has been his dedicated work behind the scenes; work which has led to his nomination in the builder category. This commitment began early, when, at age 15, he and Ed Shear literally built the Allandale ball park now known as Shear Park by hand, out of what was then Crawford’s field (where cows often grazed amid the impromptu baseball games).

Marshall was the Secretary-Treasurer of the Barrie Flyers Junior “A” Hockey Club from the team’s inception in the 1945-46 season, until its final season in 1959-60. Along with the many great players, assistant coaches and trainers who contributed so much over fifteen seasons, Archie was one of five men who made the great franchise click. They included Coach, eventual owner and hockey legend “Hap” Emms, manager Howard Norris, president Charlie Christie, trainer “Hank” Partridge, and secretary-treasurer Marshall.

During their tenure in Barrie, the Flyers won four O.H.A. champion¬ships, four Eastern Canadian titles, and two Memorial Cups. They also sent dozens of great players to the N.H.L. and the other professional leagues, sponsored baseball teams during the summer, and helped to lay the groundwork for what would become the Barrie Minor Hockey Association.

Marshall was instrumental in helping to organize the Barrie Sports Hall of Fame Society. He was a charter member, as well as the Society’s founding chairman. He was also the recipient of the Rotary Club of Barrie’s 1987 Unsung Hero Award for service to sports in his community.