The ceremony was taped at Allandale Recreation Centre on October 5, 2022.

View photos from the 2022 induction ceremony

The next Induction Ceremony will be held on October 4, 2023.

The Barrie Sports Hall of Fame Society grew from small beginnings as a self-appointed “steering committee” in the summer of 1984. It has grown into a volunteer organization which helps to perpetuate the names and deeds not only of Barrie’s great athletes, but also of those selfless individuals who have worked to create an environment in which such athletes could and can excel. 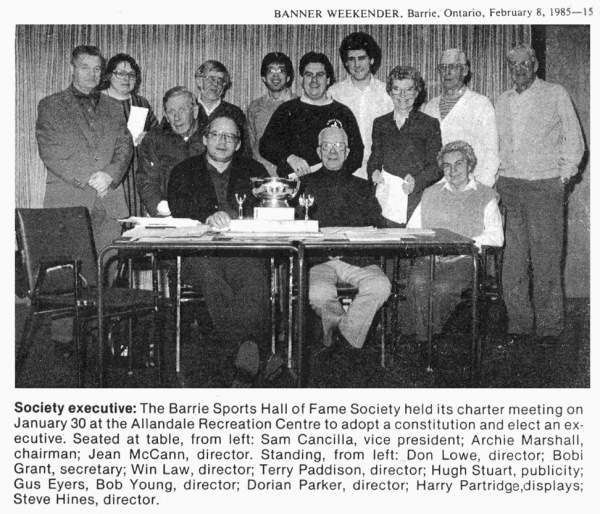 The diligent work of the steering committee culminated in the Society’s charter meeting on January 30, 1985 at which time the society’s constitution was adopted. The Barrie Sports Hall of Fame Society became an official entity.

The City of Barrie graciously consented to allow the Allandale Recreation Centre to become the home of the Barrie Sports Hall of Fame. It is here that portraits celebrating the great men and women from Barrie’s sporting history, both past and present, have been displayed for over twenty years.

The Society promotes recognition of and interest in the history of sports in Barrie. It has undertaken occasional research projects and displays dealing with local sports history. These displays are also featured from time to time at the Allandale Recreation Centre.

The Barrie Sports Hall of Fame is honoured to have been chosen custodian of the Greg Johnston/Shane Corson Trophy. This trophy, donated by a group of Barrie citizens, is presented each year to Barrie’s outstanding amateur athlete, based on criteria established by the society. The trophy is intended as a permanent form of recognition of the two fine hockey players for whom it is named. Greg and Shayne, drafted respectively by the Boston Bruins and Montreal Canadiens, were key figures on Canada’s 1985 World Junior Hockey champions.